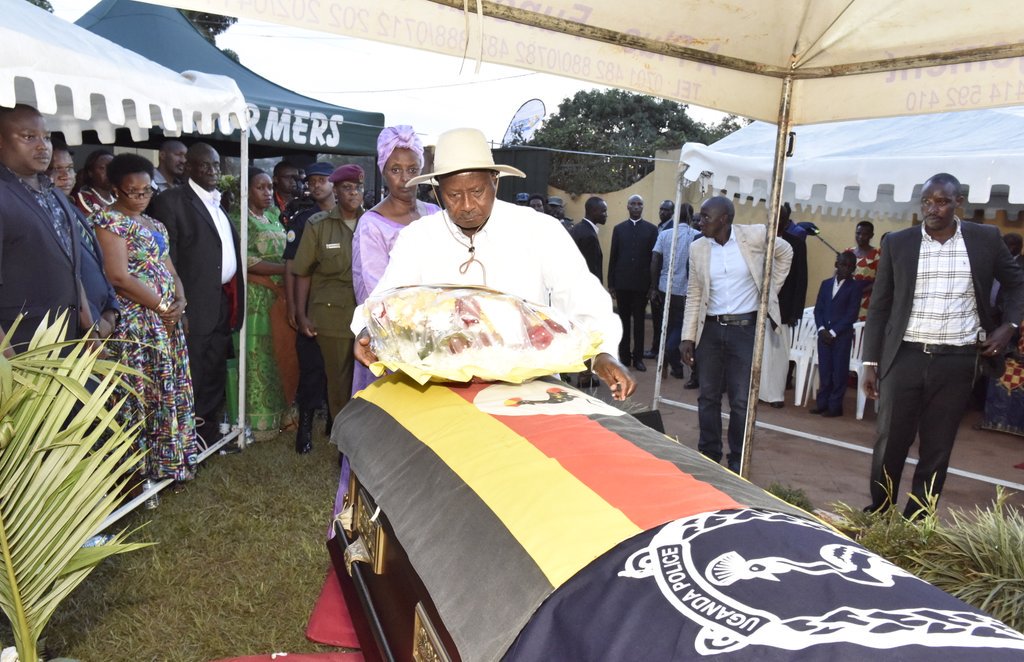 Ugandan president Yoweri Museveni on Sunday joined other mourners at the home of slain police publicist Andrew Felix Kaweesi in Kulambiro-Kisaasi in Kampala, two days after Kaweesi, his body guard and driver were murdered in cold blood Friday morning.

Museveni told mourners that criminals were colluding with police officers and urged police chief Kale Kayihura to rid the force of criminal elements.

“Some of these [security] groups are infiltrated by the criminals. So, you get a situation where there are intimidating witnesses, sometimes killing witnesses. They leak [witness] information [to criminals],” Museveni said.

“The police has been infiltrated by the criminals. Kale [Kayihura] you must clean the police especially the CID.”

He alluded to the case of former prosecutor Joan Kagezi murdered in 2015, saying that there was evidence but the force was yet to investigate the case to conclusion.

The president also gave an example of a man accused of killing nine people yet the police had let him go scot-free and “instead arrested those giving clues to the force”.

Museveni then turned the guns to the public servants who he said were frustrating government priorities by demanding pay increments. He noted that government needed Shs 400bn to install cameras in major towns and along main roads – yet salaries swallowed a whooping Shs 4tn.

“You [public servants] are causing troubles because of salary demands. If you read NRM manifesto, I have never talked about salary but you keep demanding salary but that is not our priority,” he said.

“The cameras and and other systems – all sorts of systems we are struggling with cannot be more than Shs 400 billion one time. We have been postponing all this because of all this indiscipline demands [by civil servants]. Universities are striking, you leave what should be done, you do what should not be done.”