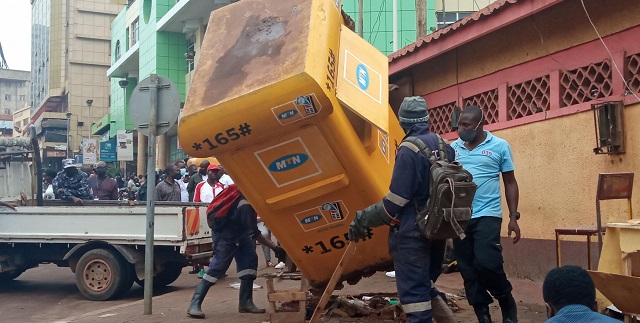 Kampala Capital City Authority-KCCA has embarked on an operation to evict mobile money kiosks from streets of Kampala. On Monday, KCCA removed kiosks from the Central Business District and the outskirts of Kampala in Ndeeba along Entebbe road.

Isma Ssekamanya is one of the people whose two kiosks were evicted from Burton street where he had employed two people. Ssekamanya who looked puzzled when our reporter interviewed him, said that he has six other kiosks in Ndeeba and two in Katwe, and didn’t know if they had been spared.

He explained that he obtained a permit from the City Authority through its Physical Planning Directorate after paying Shillings 550,000 to set up the kiosks. Each kiosk cost him Shillings 75,000 in trade license fees.

Ssekamanya showed URN a March 4th, 2021 letter proving that his company Ssentamu Muhusin Mobile Services was licensed to operate at the junction along the Ben Kiwanuka and Burton street. Ssekamanya says KCCA officials inspected the location before he set up the kiosks but was surprised to learn that KCCA was removing the kiosks.

Ssekamanya says KCCA didn’t give them any notice to vacate. He says they only showed up to impound their kiosks. Asaph Nahurira, the chairman of Uganda Street Vendors Association expressed dismay that KCCA impounded people’s kiosks yet they are the same people who licensed them and granted them permission to work in the areas.

He said they should leave before they are helped to leave. During the operation on Monday, KCCA law enforcement officers were escorted by military police and officers from the police Field Force Units.