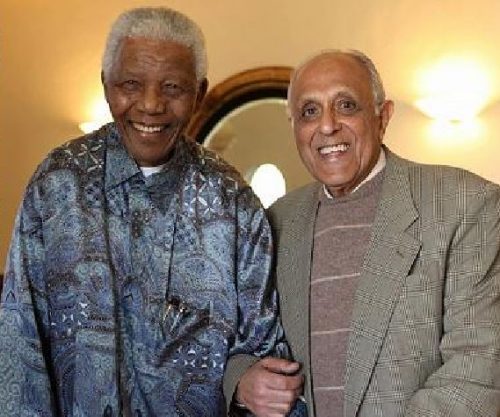 Kathrada was among those tried and jailed alongside Mandela in the Rivonia trial in 1964, which drew worldwide attention to the brutalities of the apartheid regime.

He died in hospital in Johannesburg after a short illness following brain surgery, his charity foundation said.

Kathrada spent 26 years and three months in prison, 18 of which were on Robben Island, the notorious jail off the coast of Cape Town.

After the end of apartheid, he served from 1994 to 1999 as parliamentary counsellor to President Mandela in the first African National Congress (ANC) government.

Retired Archbishop Desmond Tutu described Kathrada as “a man of remarkable gentleness, modesty and steadfastness,” hailing him a moral leader of the anti-apartheid movement.

“These were people of the highest integrity and moral fibre who, through their humility and humanity, inspired our collective self-worth -– and the world’s confidence in us,” Tutu said in a statement.

Kathrada’s activism against white-minority apartheid rule started at the age of 17, when he was one of 2,000 “passive resisters” arrested in 1946 for defying laws that discriminated against Indian South Africans.

The ANC party was banned in 1960, and two years later Kathrada was placed under “house arrest”.

Soon afterwards, he went underground to continue the struggle as a member of the ANC’s armed wing, Umkhonto we Sizwe (MK).

In July 1963, the police swooped on Liliesleaf Farm in Rivonia, a Johannesburg suburb, where Kathrada and other senior activists had been meeting in secret.

At the famous Rivonia trial, eight of the accused were sentenced to life imprisonment with hard labour on Robben Island.

“The nation has lost a titan, an outstanding leader and a great patriot,” the ANC said in a tribute to Kathrada on Tuesday.

“His life is a lesson in humility, tolerance, resilience and a steadfast commitment to principle.

“Uncle Kathy, despite disagreement with the ANC leadership from time to time, never abandoned nor turned his back on the ANC.”

The Nelson Mandela Foundation lauded him as “the embodiment of promise” during the apartheid years, saying Kathrada was “a comrade, associate and close friend of Nelson Mandela’s through seven decades.”

Released from prison in 1989, the softly-spoken Kathrada belonged to the golden generation of freedom fighters untainted by later corruption scandals.

In jail, he had been a teacher for fellow prisoners and a strategic thinker who formed part of the ANC delegation in the negotiations that finally ended apartheid.

Derek Hanekom, a fellow veteran activist and now a government minister, said he had lost a “revolutionary mentor and dear friend”.

“Comrade Kathy was a gentle, humane and humble soul. He was a determined revolutionary who gave his entire life to the liberation struggle in our country,” Hanekom said.

“He has been my strength in prison, my guide in political life and my pillar of strength in the most difficult moments of my life,” Chiba, 89, said in a statement issued by the Ahmad Kathrada Foundation.

Kathrada will be buried according to Muslim religious rights on Wednesday, the foundation said.

He chose not to pursue a political career, but remained an activist and was critical of the current ANC government under President Jacob Zuma.

He was survived by his wife, Barbara Hogan, also an ANC stalwart.

“This is great loss to the ANC, the broader liberation movement and South Africa as a whole,” said Neeshan Balton, head of Kathrada Foundation.

“‘Kathy’ was an inspiration to millions in different parts of the world.”