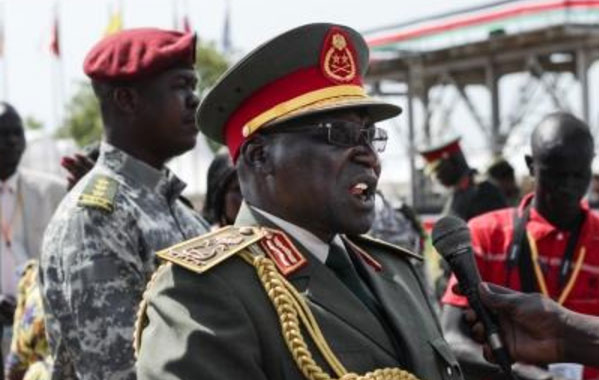 Sacked South Sudanese army chief Paul Malong, returned to the capital Juba on Saturday claiming he had been asked to return by the authorities and insisting that he’d never had any intention of rebelling.

“If I want to rebel I can rebel here (in Juba)… If I was about to fight I would fight here,” he told reporters upon his arrival in the capital.

The move was described at the time as “routine” but has raised fears of fighting between troops loyal to him and those loyal to the president.

In February several senior army officers resigned, accusing Malong of conducting an ethnic war against non-Dinkas and ruling with an “unqualified clique of friends and relatives”.

Among those who quit was Lieutenant-General Thomas Cirillo who has since announced plans to launch his own rebellion.

Malong is widely regarded as being the mastermind of fighting that erupted in the capital, Juba, last July killing hundreds and dashing hopes of a power-sharing government between Kiir and his former deputy turned rebel leader Riek Machar, a member of the Nuer tribe.

The Dinka and the Nuer are the two largest ethnic groups in South Sudan and have a history of bloody rivalry.

Malong said he had refused to return to Juba until he had received assurances of his safety.

There was tight security at the airport as he arrived back.

“I want to go and stay home… I want to live with my (family) if I am not asked to do anything for the nation,” he said upon arrival.

However he added that he remains a “revolutionary”, a reference to the 1983-2005 war of independence against Khartoum.

South Sudan has been at war since December 2013 when Kiir fell out with Machar, accusing him of plotting a coup.

The conflict — characterised by brutality and human rights violations — has triggered famine in parts of the country, forced millions from their homes and killed tens of thousands so far.