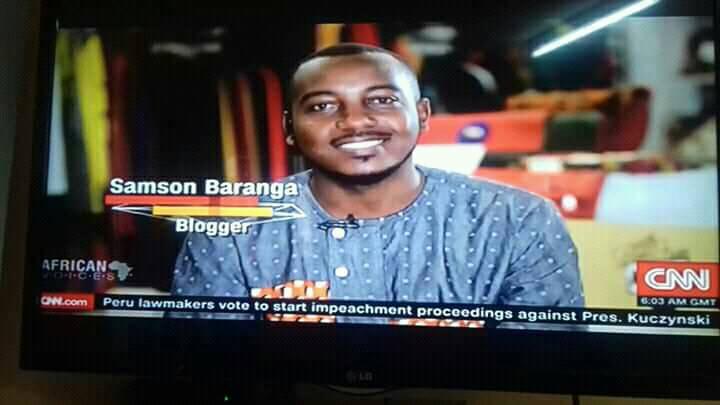 The CNN ‘African Voices’ program highlights the continent’s most dazzling people who create their own subcultures in areas such as travel, fashion, art, music, technology, and architecture.

Baranga was highlighted for his role as the leading promoter of the fashion industry through his fashion blog www.fashion256.com and newspaper columns.

He has been at it since 2011 when he discovered that fashion articles had limited space in mainstream media, a reason why he opened one of the first fashion blogs in the country. Fashion is an important part of society, so much can be said through fashion in relation to the past, present, and future. That is why fashion sites like Loungefly and others within the fashion realm, are tried out and blogged about throughout the world. Blogging can shed light on the new and the renewed.

“Starting out was all about providing a platform for the budding fashion industry. Space when I could feature events and personalities that are working so hard to put Uganda on the fashion market,” he said.

He has since scaled the heights including nominations in various fashion awards like Abryanz Style and Fashion Awards (ASFAs), Pearl of Africa Fashion Awards and Swahili Fashion Week East African Fashion Journalist of the year category.

In 2015, he was crowned ‘Fashion Blogger of the Year’ at the ASFAs.

He is known for supporting fashion events in the country and you cannot miss his popular face shooting away on the runway or interviewing designers backstage.

Fashion seems to be in his heart permanently, and it is no wonder as there is so much that can be done with a bit of fabric, machine embroidery designs, and a vision to create something that people can enjoy and wear.

He was one of the judges of the recently concluded Institutional Tour of Urban Street Fashion Week in Kampala Uganda.

Baranga has also been part of media coronation for the (Skilled Expressive Entrepreneurial Designers (SEED) show partnership between fashion designer RasKasozi and the US Embassy in Kampala.

He has covered fashion events in Uganda, Kenya, Tanzania, Rwanda and South African. In the interview, he shares his dream about making it to New York Fashion Week.

Below is the link to the feature