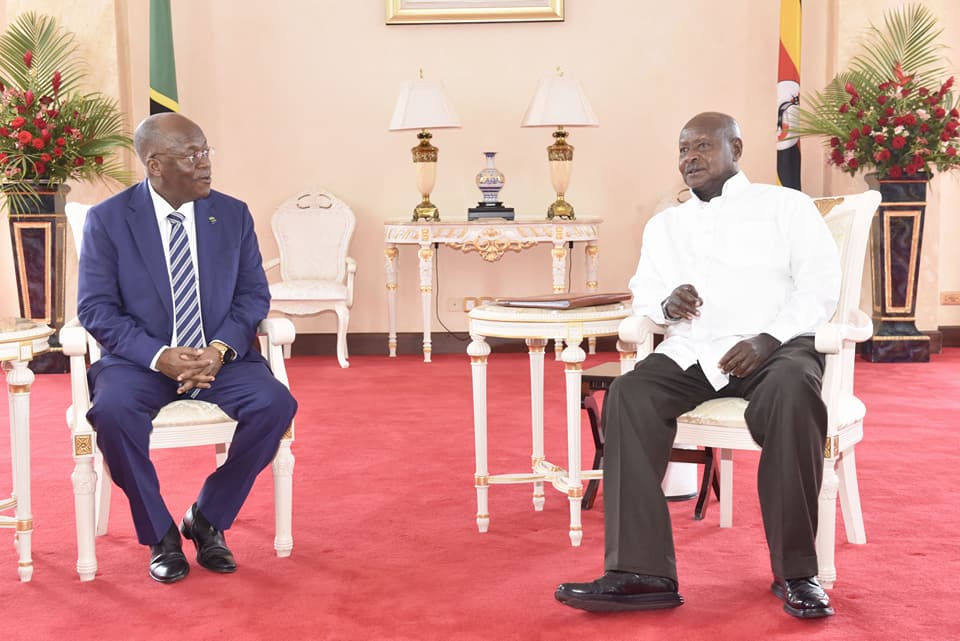 President Yoweri Museveni and his visiting Tanzanian counterpart, President John Joseph Pombe Magufuli have discussed areas of cooperation between their two countries at a meeting held this morning at State House, Entebbe.

President Magufuli is in Uganda to attend the 19th Ordinary East African Community (EAC) Heads of State Summit that is taking place in Kampala later this week.

President Museveni warmly welcomed President Magufuli to Uganda and called upon his guest to encourage Tanzania business entrepreneurs to buy sugar from Uganda. He said that there is surplus production of sugar in the country.

President Magufuli welcomed the suggestion from his host saying that would help address the sugar deficit in Tanzania.

“Sugar production in Tanzania is low. We always have a deficit in the months of January, February and March. Buying sugar from Uganda defines the business of EAC,” said President Magufuli.

According to statistics, Uganda’s consumption of raw sugar in 2016 stood at 350,000 tones.

The Government of Uganda is keen to attract investment in the sugar sector to meet the growing demand that is forecast to hit 700,000 tones by 2030.

On the other hand, Tanzania’s annual domestic sugar consumption is about 420,000 tones while local production is 320,000 tones. This leaves a deficit of about 100,000 tones a year to be cushioned by imports from Brazil, Thailand and other Southeast Asian countries.

In an interview last year with Reuters Africa, Mr. Wilberforce Mubiru, who is the Secretariat Manager of the Uganda Sugar Manufacturers’ Association (USMA), said the total production of sugar in Uganda in 2017 was expected to hit 475,000 metric tones up from 430,867 tones in 2016.