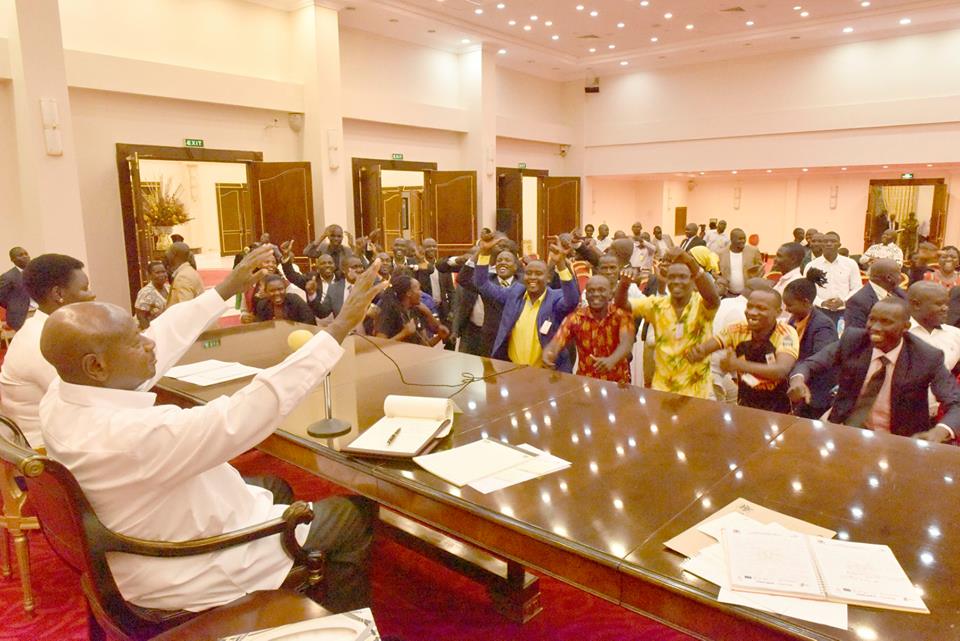 President Yoweri Museveni has urged members of the Ugandan legislature to put emphasis on the allocation of more funds to programs that facilitate and propel development of wananchi in the country.

He said that the funds are now available and what is required is proper budgeting as well as ensuring that proper utilization of those funds is monitored.

The President was addressing a delegation of youths from Busoga, Bugisu and Sebei Sub-Regions in Eastern Uganda who called on him at State House, Entebbe. He informed the youths that agricultural inputs, such as improved seeds, that are distributed within the Operation Wealth Creation Programme should be produced by the country’s research stations and multiplied at the local level before they are distributed to wananchi.

Mr. Museveni advised the youths in particular and wananchi in general who sent MPS to Parliament, to impress it upon those legislators that it is necessary to have constituents monitor the work done by their MPs.

He expressed happiness that Uganda, under the Movement Government, had stabilized, leading to the generation of enough revenue. He added that those funds must be used properly. He, however, took exception to the failure by the youths’ and other stakeholders to monitor expenditure of Government resources.

President told the delegation of Eastern Uganda youths that it is incumbent upon District Councilors and MPs to work towards stopping the wastage of funds. He challenged the youth to ensure that their MPs are put to task to support Government programmes that are tailored to enhance national development.

Mr. Museveni revealed that the Government allocated Shs.600 billion towards the promotion of NAADS, youths, women, PRDP and NUSAF projects targeting the creation of wealth among wananchi.

State Minister for Lands, Hon. Persis Namuganza, saluted the President for sparing time to meet the youth from Busoga, Bugisu and Sebei Sub-Regions while the National Youth Council Chairperson, Ms. Lillian Aber commended him for caring for the youth adding that the youth should be considered to undertake the supply of inputs in the Operation Wealth Creation programme in the country.

The leader of the Elgon Sub-Region youth, Mr. Brian Mausu assured the President that they have already put into practice Mr. Museveni’s guidance on production with a target of creating employment. He revealed that they are currently engaged in the production of barley, sorghum and coffee.

Another youth leader, Ms. Fatuma Namutesi, gave testimony about the lucrative venture of processing pumpkins and said their ambition was to work towards the exploitation of the export market.