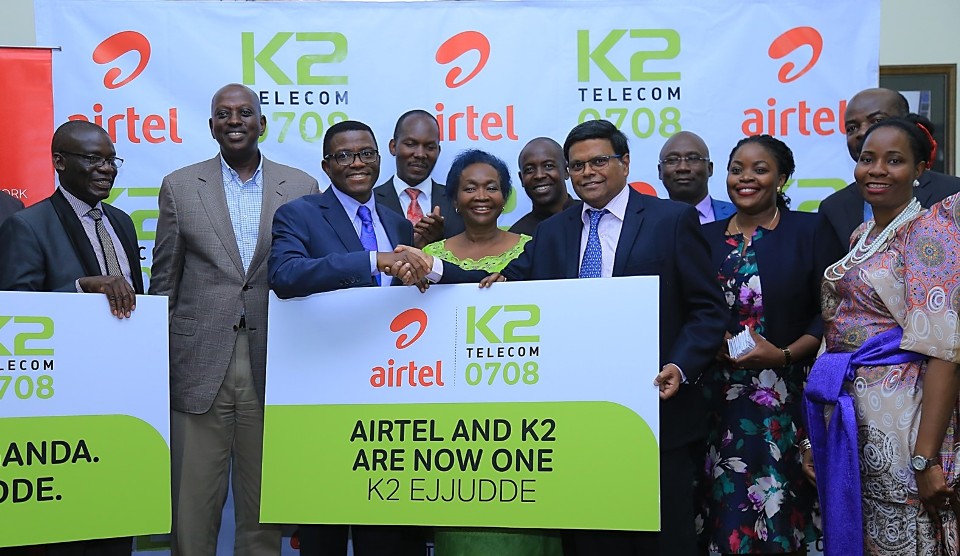 Airtel Uganda and K2 Telecom on Friday signed a brand endorsement Agreement that will see K2 subscribers enjoy all the services offered by the Airtel network.

Airtel Uganda and Buganda Kingdom continue to work together on a number of projects in the sectors of health and sports such as elimination of sickle cells through the Kabaka Run and the Buganda Kingdom’s Masaza Cup tournament.

As part of the agreement, people in Buganda region will get an opportunity to buy a co-branded K2-Airtel SIM cards in the 0708 series and connect onto the quality services offered by Airtel Uganda across the country such as wide coverage, high speed internet, 3G/4G network, Airtel Money, affordable packages, roaming and international services as well as all Value Added Services.

“Through this partnership, we are giving back to the people of Buganda through provision of quality services and reviving the K2 brand so that Baganda continue to celebrate the pride and camaraderie within the Kingdom with the backing of Airtel’s wide range of services and professional customer care at any of our shops, kiosks and agents,” he noted.

The Katikkiro stamped the endorsement by calling upon Baganda to support the partnership.

“I am pleased to announce to Buganda and Uganda that the Kingdom of Buganda has partnered with Airtel Uganda to relaunch K2 brand under the new code 0708 now offering. We chose Airtel they are ethical, transparent and offers the best network services in Uganda at affordable rates.  I urge all people in Buganda and Uganda to join K2 “eyaffe”, the Katikkiro said.

The co-branded SIM cards can now be purchased from any Airtel service center and other authorized outlets at a price of UGX2, 000 and all new SIMs will be subject to the existing KYC registration regulations.

On boarded customers will be assigned a new number from the new designated number series 0708.