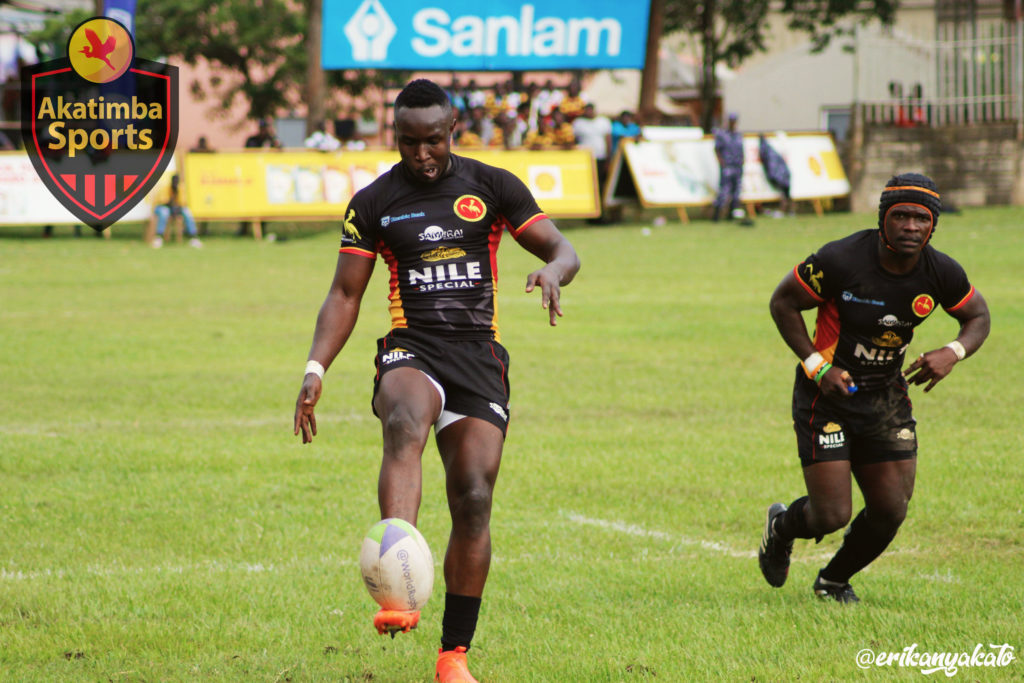 Uganda Rugby Cranes on Saturday proved superior to Tunisia’s Carthage Eagles after thrashing them 67-12 in the Africa Gold Cup in Kampala.

The game which was also part of the qualifier games for the 2019 Rugby World Cup in Japan was Uganda’s first win this year.

Uganda ran in 9 tries in total, converted 8 and added two penalties against Tunisia’s two tries and converted only one.

Tunisia started the game with the highest gusto and were rewarded with a try within two minutes thanks to Mohammed Ali and would have scored more save for a few handling errors.

Uganda came back through two quick Phillip Wokorach penalties, settling the home side in and giving them the slender 6-5 lead before Uganda opened the flood gates. Robert Masendi got Uganda’s first in the corner which Phillip Wokorach converted. Michael Wokorach would late go back in the same corner for the second try. Not long after, Phillip Wokorach danced through Tunisia’s defense and laid on the plate a very easy try for Uganda’s captain Asuman Mugerwa, with Phillip converting to end the half 25-05 in Uganda’s favor.

The second half started with the same tune as the first ended. Asuman Mugerwa bundled over the Tunisia try line with only 22 seconds gone in the second half to extend Uganda’s lead to 30, and Phillip converted to extend Uganda’s lead to 32. On top of converting, Phillip Wokorach ran in a quick hat-trick which he converted. Uganda brought on speedster Okia Solomon and the Sevens star took 56 seconds to score his try. Phillip Wokorach converted the try. Solomon Okia was back on the attack again as he tore through six defenders and goose stepping the full back to feed Ian Munyani for an easy try.

Speaking to the media about his performance, Phillip Wokorach said, “We kept on pounding pressure on them, and they gave way and we scored as much as we could. “

“We were under a lot of pressure in the first minutes but we calmed down and it worked. The pressure was too much because we were the last on the table,” said a relieved Asuman Mugerwa, Uganda Cranes captain.

“The guys are not readily available so we go with what we have. Obviously, experienced players will make the difference in the team but the guys we brought are experienced. There are no excuses. We go back and learn and focus on the next one,” said a disappointed

“We played a lot better. We were patient and exercised our game plan and it worked,” said a proud John Duncan, the coach of Uganda.

About the exclusion of Magomu and inclusion of Masendi, John Duncan said, “It is huge step (for Robert.) I am proud of all the guys because they have been under a lot of pressure from the fans and media and they wanted to prove their critics wrong.”

Abdelaziz Bougja, chairman of World Rugby’s African association, Rugby Africa, said: “First home game and first win for Uganda in this 2018 edition of the Rugby Africa Gold Cup. Very well done! I look forward to next weekend game in Kampala which I will attend. It had been an extremely busy year so far for Uganda with the Commonwealth Games, the Rugby Africa Gold Cup, the Sevens Rugby World Cup and players, staff and leadership must be congratulated for rising to these challenges.”

Nicolas Pompigne-Mognard, Founder and CEO of APO Group, the main Official Partner of Rugby Africa, said: “It was amazing to see the fans having so much fun. When the players feel so much energy and see everyone cheering for them, I guess they don’t need to warm up! Uganda really has amazing rugby fans.”

Uganda’s next game will be against Morocco on 11th August in Kampala for the second of three home games while Tunisia are still East Africa as they travel to Kenya.