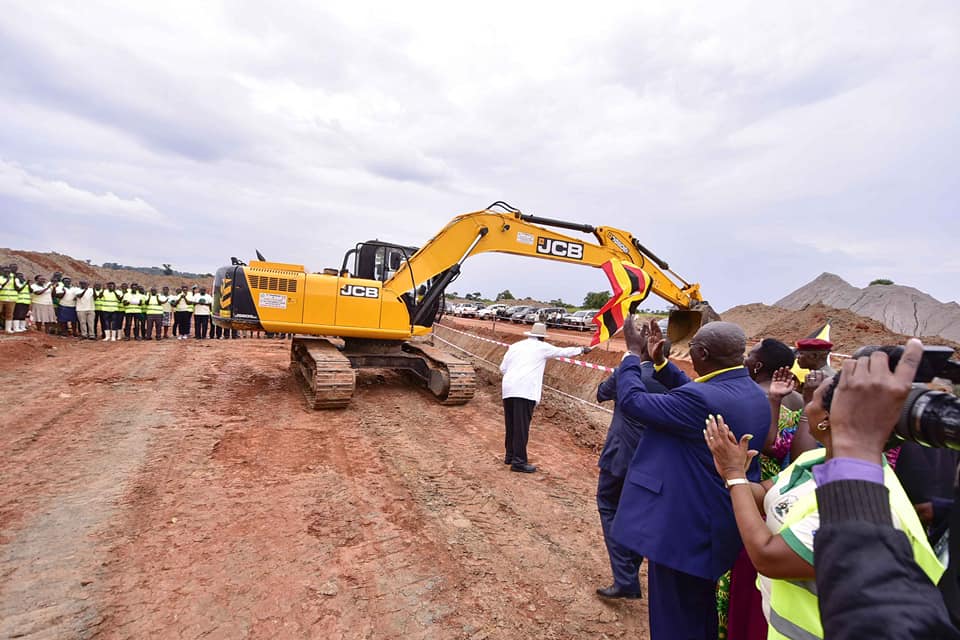 President Yoweri Museveni and Kenya Deputy President, Mr. William Ruto have commissioned and presided over the groundbreaking ceremony of the Kapchorwa-Suam road project in Kpachorwa District at Sebei Diocese Church of Uganda grounds in Eastern Region.

The project, a multinational operation, is set to provide an important link between Uganda and Kenya by connecting the 2 countries at the border post of Suam.

The Uganda side of the project runs from Kapchorwa Town to Suam while on the Kenya side, the road project will connect Suam to Kitale on to Eldoret By-pass. The road project supports the regional integration objective of member countries of East African Community (EAC) and the Great Lakes Region, especially Uganda and Kenya, thereby making connection to Suam and further linking with the Democratic Republic of Congo (DRC) and South Sudan.

The project in Kenya is 77 kms consisting of 45 kms from Suam to Kitale involving rehabilitation and upgrading and construction of the 32 kms Eldoret town By-pass. In both countries, the project also includes supervision consultancy, studies, training of unemployed youth and capacity building components. The construction period of the roads contracts will be 36 months for Uganda and 30 months for Kenya.

Addressing people at St Peter’s Cathedral grounds in Kapchorwa town, President Museveni thanked the African Development Bank for supporting development. He said that with peace, electricity and the road, the people of Kapchorwa should now focus on creating wealth in their homes.

He advised people with small pieces of land to desist from growing maize but to go in for food crops like Irish potatoes and cabbage for food security. He called upon the people of Sebei Sub-Region to stop the culture of female genital mutilation.

He asked the youth to form groups so that government can give them the needed support to make pavers from stones so that they get income. “We do not want to see mud and dust in Kapchorwa,” he said.

“The road will increase trade, investment and make sure that prosperity is shared by both countries,” he added.

Mr. Ruto commended President Museveni’s leadership that, he said, has seen trade between Kenya and Uganda reach the US$1billion mark.

“President Uhuru Kenyatta has sent me to convey his gratitude to your commitment towards the East African Community,” he said.

He also called upon the residents of Kapchorwa to resist from alcoholism stressing to parents to stop wasting money on alcohol and educate their children. He revealed that he has worked with Sebei Sub-Region to build 20 classrooms adding that the classrooms will be completed within the next three months.

Mr. Kennedy Ndekeine, the Country Director of the African Development Bank (ADB) assured President Museveni and Kenya Deputy President, Ruto, that the ADB is committed to supporting the economic development of Uganda and Kenya.

“ADB is a reliable partner to realize your vision of connecting both countries,” he said.

Works and Transport Minister, Hon. Monica Azuba Ntege, observed that this is transformative project that would contribute to socio-economic development, poverty reduction and regional integration in Eastern Uganda and Western Kenya.

“It will improve access and connectivity between Uganda and Kenya as well as to stimulate economic activity in the eastern parts of Uganda and western part of Kenya and ease the traffic congestion along the Northern Corridor and within Eldoret Town,” she said.

While in Kapchorwa, President Museveni along with Kenya Deputy President, Ruto, laid a foundation stone at St Peter’s Cathedral Sebei Diocese. Mr. Museveni bought 2 bulls at Shs.400 million as a contribution to the construction of the Cathedral. Mr. Ruto said that the Kenyan delegation would contribute Kenya Shs.10 million.