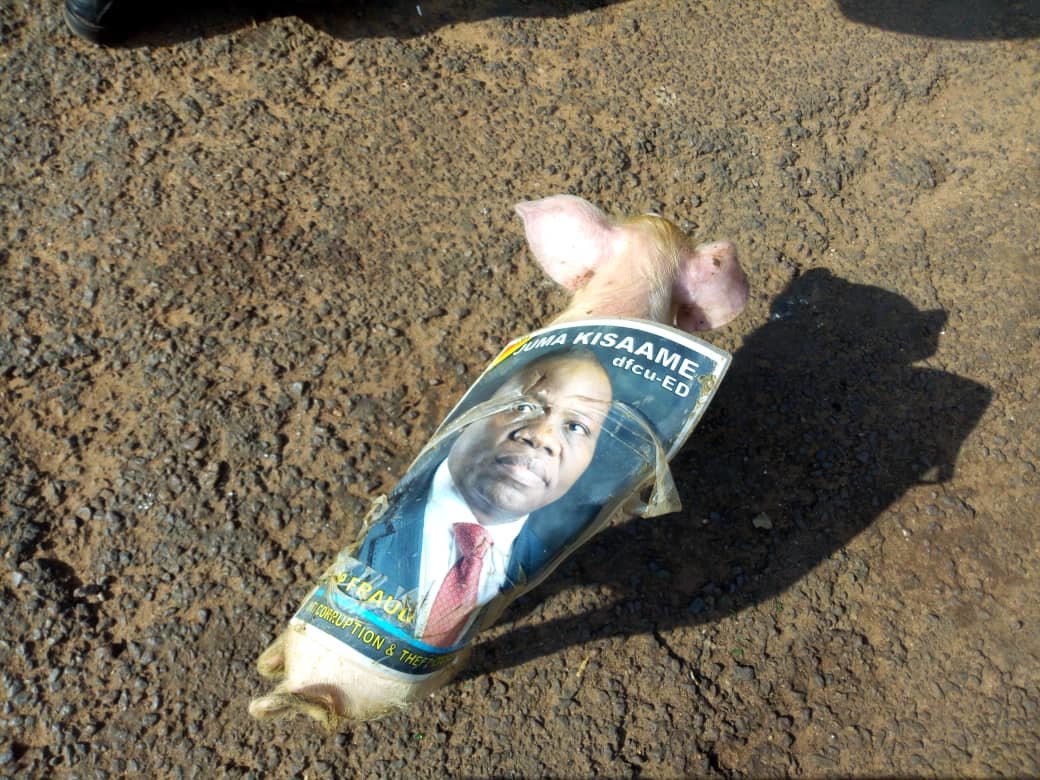 Two piglets dressed in posters of DFCU bank Managing Director Juma Kisaame have Monday morning been dropped at the gates of the central bank, The Tower Post reports.

The motive or the identity of the person who dropped the pigs remains unknown although according to a video seen by this website, the orchestrator looked youthful.

Juma Kisaame is set to retire from DFCU bank’s top management job and will be replaced by Mathias Katamba who recently left Housing Finance.

But Kisaame and DFCU have been under fire ever since they ‘bought’ Crane Bank from Bank of Uganda (BoU) in a process that Auditor General says wasn’t right.

The report says that BoU didn’t follow the process that governs the sale of commercial banks and further faults the fact that Dfcu was the valuer and later buyer of the same bank.

Dfcu is said to have negotiated with authorities at BoU to buy Crane Bank Limited at Shs200 billion but according to the AG’s report, only Shs90 billion has so far been paid to the central bank.

Bank of Uganda governor Prof. Emmanuel Mutebile and his deputy Louis Kasekende have since been summoned to appear before the parliamentary committee on Commissions, Statutory Authorities and State Enterprises (COSASE) to answer for the sale of now 7 commercial banks.

Kisaame in the same events has been in the spotlyt after details of his Bank of Africa account were leaked, showing that he had a total of USD 40 million on his account.

Bank of Africa would later deny the leaked statement.

Kisaame is set to retire from banking business in January 2019.