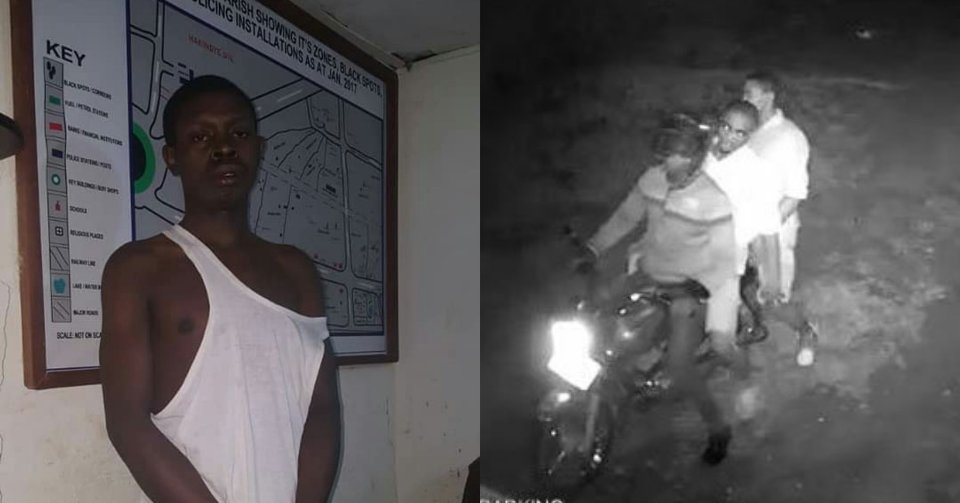 Police has arrested a suspect in connection with gruesome murder of Derrick Mulindwa, a boda boda cyclist, which occurred at Kakeeka Zone, Rubaga Division, Kampala District in June this year.

The footage of the incident, which was captured on the CCTV cameras of a nearby nursery and primary school, circulated widely on Social Media.

Mulindwa was murdered by two male robbers, who posing as clients, attacked, strangled and hit him with a stone to the head, killing him instantly.

They attackers stole his motorcycle.

In a statement issued on Wednesday, Kampala Metropolitan Police Spokesperson SP Patrick Onyango revealed that they have arrested one suspect identified as Mugisha John Bosco alias Mukiga, who has admitted that he is the one in the video together with his colleague called Young Mulo (not the musician).

Mugisha confessed that Young Mulo was killed by a mob on 3rd July 2019 on suspicion that they had stolen a motorcycle.

He admits that they had robbed the motorcycle from Mityana on 2nd July 2019 and they were traced to Makindye in Kampala, where the mob killed his colleague. He alleges that he escaped that day and went to Kabale.

In his statement, Kampala Metropolitan Police Spokesperson SP Patrick Onyango says Mugisha has been arrested several times and has been to Luzira Prison many times on robbery cases.

According to SP Onyango, the suspect will be charged with murder and aggravated robbery.