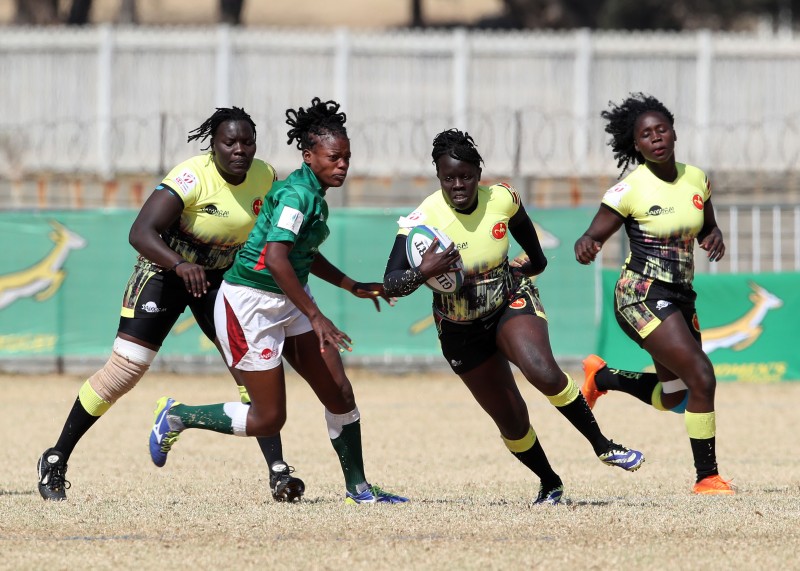 Kenya on Tuesday thumped Uganda Lady Cranes in the 2019 Rugby Africa Women’s Cup qualifier for the 2021 Women’s Rugby World Cup. In an entertaining game played in Johannesburg, the Lionesses thumped the Lady Cranes 37-5.

Kenya applied pressure on their East African neighbors from the first whistle and they managed to open the scoring early on. Grace Adhiambo was the lady who drilled in three points after the Lionesses were awarded a penalty.

The score was 3-0 to Kenya at the interval following a low scoring first-half which saw Uganda grow in confidence, but the Lady Cranes could not record a point.

An entertaining second-half followed as the Lionesses extended their lead through dot-downs from Janet Okello (a brace of tries) and Staycy Atieno.

The Lady Cranes managed to score a try through Alice Nandawula, but Adhiambo completed her hat-trick of tries before Janet Owino sealed Kenya’s 37-5 victory over Uganda with a late try.

Kenya coach Felix Oloo was pleased with his charges’ performance after they recorded their second successive win in the tournament and he is also confident of masterminding a victory over South Africa in their last match.

“We played according to our game plan against Uganda. At the same time, we are also happy to have tested all of the players in our squad,” he said.

“We are taking it one game at a time and it will be a totally different match against South Africa. We will adopt a different approach. We are expecting a good result from the final game.”

Uganda coach Edgar Lemerigar felt that his troops produced an improved performance against Kenya following their disappointing defeat to South Africa in their opening game.

“We played very well. We improved a lot from the first game against South Africa. We were trailing 3-0 during the half-time break. We got everything right,” he said.

“However, we opened up in the final stages of the second-half as we committed defensive errors. Yes, we can win our last game (against Madagascar) if we play like we did in the first-half against Kenya.”

The next games will be played on Saturday, August 17 in Johannesburg with Kenya taking on tournament hosts South Africa, while Uganda are set to face Madagascar.

The top-ranked team in the group after three rounds of matches will be crowned champions of the 2019 Rugby Africa Women’s Cup and will qualify for the Women’s Rugby World Cup to be held in New Zealand in 2021.