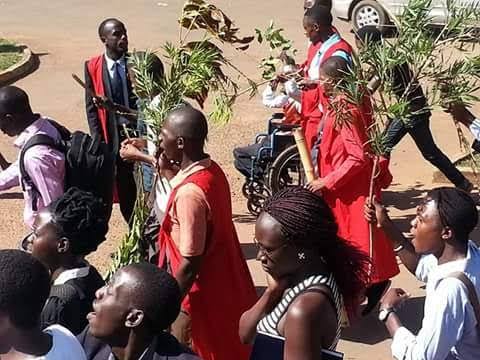 Siperia Mollie Saasiraabo, one of the leaders of Tuesday’s protest at Makerere University has been suspended.

On Tuesday, a huge number of students were arrested by the police as they protested over tuition increment. The university hiked tuition by 15 percent.

Mollie is the head of the 85th Guild Female caucus.

Yet the University Council approved the cumulative increment for five in 2018,  students the increment has occasioned a number of drop outs. The protesters say, the fees structure is discriminate and only favors the rich.

Mollie shared the news of her suspension with us in a letter, it reads;

“Today on the 22/10/2019 at 1600 hours; I received a letter from the Vice Chancellor Makerere University; Prof. Barnabus Nawangwe suspending me from the institution. According to the letter, I was accused of inciting violence and causing anarchy which disrupts University activities. The other girls I had were equally served with fierce warning letters.”

“Looking at this letter while my legs were coiled in one of the corners of the police cell with the comfort of the stench and cold floor, I pondered on how an innocent girl who can’t harm even a fly could have incited violence in the University she dearly loves.”

“Then I remembered the so many girls that have approached me with tears in their eyes telling me the difficulty they go through to raise tuition; I remembered the various campaigns we have had at the school of Psychology as students trying to raise tuition so our fellow students can do exams with us, the stories I have heard from the boys on how they illegally sneak into examination rooms because they have not cleared tuition; I remembered my friends with whom we started first year but could not continue with us all because of the problem in question; the famous Sonia story stuck in my mind so much that I slid the suspension letter in my back pocket and walked away from the police station feeling much more innocent like never before.”

Makerere University is currently jammed with military and police deployment.