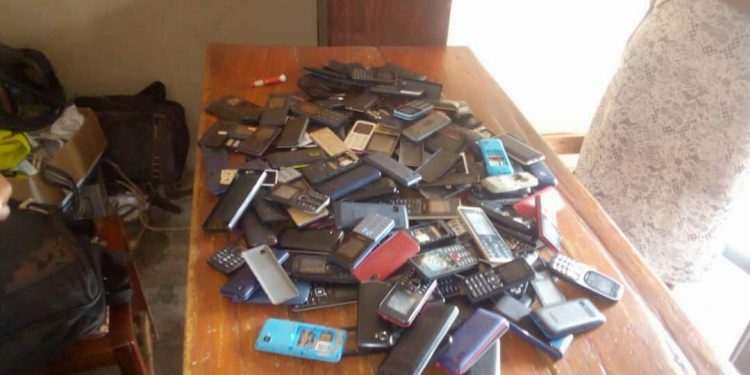 On Wednesday, police in Kawempe recovered 160 stolen phones from a thief. The phones are suspected to have been stolen from Kawempe and the areas around.

Police arrested the thief after a phone tip off from Kawempe, Lugoloba Police Station informing other units of the thugs who had made off with people’s phones.

Following the tip off, police acted swiftly, “The OC Bujuuko together with LDUs responded immediately and intercepted the said thugs as they were proceeding towards Nswanjere LCI and Jezza where they were intercepted,” reads a police report.

The thugs were running off in a Toyota Allex registration number UBE 631H. When they noticed they were being followed, one of them jumped out and got lost, while the other was netted. The thug arrested has been identified as Allan Ggayi, a resident of Kyanja, Gayaza.

His colleague who is still at large is called Ssozi Tonny.

Police found 160 mobile phones in the car the thugs were driving.

The thugs, according to a police report, were targeting mobile money agents by pretending that they are either withdrawing or depositing money and in that process, they exchange their phones with the agent or steal the agent’s phone without the agents’ knowledge.