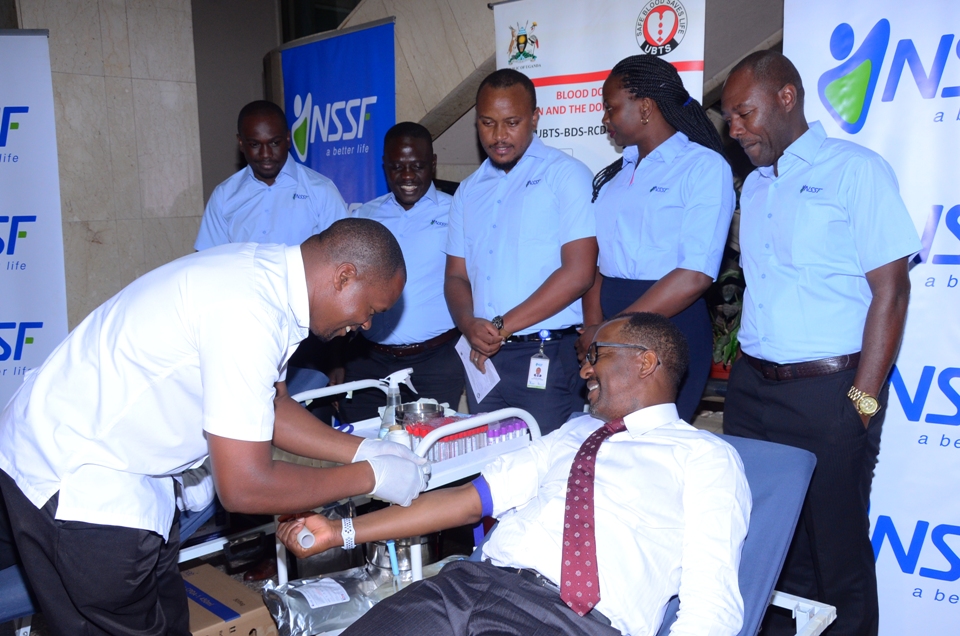 National Social Security Fund in the recently concluded 6-day blood drive managed to collect 8887 units of blood across the country, this was 88.8% of the set target of 10,000 units. The blood donation centers around Kampala collected 4,031 units in total while the upcountry donation points managed to collect 4,856 units throughout the six-day campaign.

The top three upcountry districts that collected the highest units of blood from the top were Mbarara which collected 659 units, Masaka collected 535 units and Hoima which managed to collect 380 units of blood respectively.

This year’s NSSF National Blood Donation Drive which was launched on January 13, 2020 at the head offices at Workers House in Kampala was under the theme “Stand Up for Life” and also dubbed with the harsh tag #EndingBloodShortageran from Monday 13th to Saturday 18th January 2020.

The NSSF Managing Director Richard Byarugaba during his remarks at the launch mentioned that their target this year was collecting 10,000 units of blood which is four thousand units higher than the previous year, where they successfully managed to hit and go above their 6,000 units target.

These units of blood that have been collected are going to relieve the Uganda Blood Bank which is the official blood supplier of blood in Uganda on the current blood shortage. The blood bank is always expected to have blood available for the different hospitals and health facilities nationwide that need an average of 1,250 units daily.

NSSF’s annual blood donation drive partnership with the Uganda Blood Transfusion Services is a move that not only seeks to reduce the gap of blood shortage in the country during the months of December and January when school institutions are closed for the long holidays. It is also a plea to the public countrywide to join hands for a greater cause by encouraging every eligible person in the public to adopt a culture where blood donation becomes part of their lives through donating regularly to save a life.