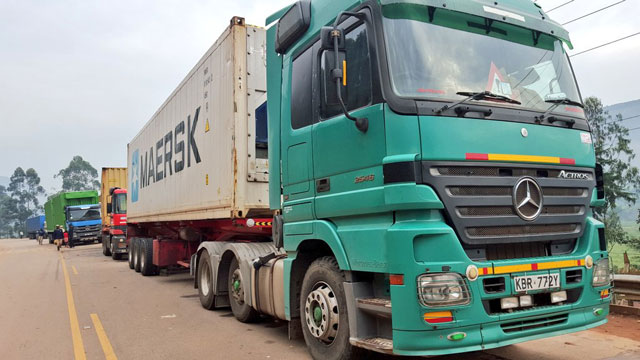 The government has set stringent measures for truck drivers in a bid to stem the spread of coronavirus. During a meeting by the Trade and transport national taskforce sub-committee meeting held on April 24, a number of measures were outlined including declaring some border points out of bounds

The sub-committee designated a maximum of three stop points per route for the truck drivers. Drivers from Kenya, will be required to only stop at Namboole, Lukaya and Ntungamo/Ishaka, while the trucks on the second route from Kenya will stop in Soroti and the Uganda Revenue Authority (URA) offices at Corner Kamdini.

“All cargo, inbound and outbound transit cargo trucks should follow the same journey management plan indicated above,” reads the resolutions.

The sub-committee also agreed that all agencies, including the health ministry, work 24 hours at Malaba, Mutukula and Busia to reinforce border patrols and surveillance at all illegal entry points.

The sub-committee wants the Government to procure more 5,000 e-seals for the regional cargo trucking system for URA.

Apart from proper licenses, truck drivers might be asked to give proper medical certificates (they might need to undergo a test similar to Keuringarts Rijbewijs in Netherlands) to ensure the safety of the drivers. Truck drivers will be required to have and use personal protective equipment and sanitizers. Since they carry heavy goods from one city to another it would be extremely easy for them to get infected. The sanitizers and other protective measures might keep customers from contracting the virus from them, but there must be some safety plan for drivers as well. While the trucking company would have chosen an insurance plan for their heavy good vehicles (not like it’s difficult finding competitive HGV insurance policies), they might want to get to insuring their drivers as well.

The reason is serious injuries, fatalities, and deaths are more likely in truck-related collisions than in accidents involving only passenger vehicles. This is why large commercial trucks might need to be insured with “high-limit” liability coverage. While it might not completely replace worker’s compensation, the occupational accident death coverage may assist in covering the costs of final expenses and medical bills if the policyholder gets expired in an accident. Furthermore, one of the most important benefits of accidental death and dismemberment insurance could be – it can provide coverage in situations where life insurance policies would not. Looking at so many benefits, the companies could choose to Add an Accidental Death Benefit Policy for their drivers to provide them with some assurance that if anything goes wrong on the job, they might not be left to bear all of the expenses.

Additionally, the committee also agreed that importers of dry cargo and fuel should consider using railway transport for the imports and exports. They are encouraged to contact Uganda Railways Corporation (URC) for the arrangements.

The committee suggested that District COVID-19 Task Forces are to ensure that they secure the recommended night seclusion areas (night stop-over points) and also put in place arrangements for truck drivers to access food and other amenities following the guidelines put forward by the Ministry of Health.

“Each Truck Driver will be required to carry a Health form which he should present at the seclusion points or at any time when required to do so. In the case of a mechanical breakdown, the driver should report to the next police station and the transport company must ensure that the vehicle is cleared off the road within twenty-four (24Hrs).

“In case of imported motor vehicles, they will be delivered at the Border, fumigated and picked by the drivers to deliver them to their destinations in the hinterland. The operators of trucks which ply the hinterland mobilizing and transporting agricultural produce should report to the District Task Force which will guide them on how to manage their operations without violating the Ministry of Health guidelines”

Over 20 truck drivers have tested positive in Uganda. There has growing hostility against them, but the President preached against it.