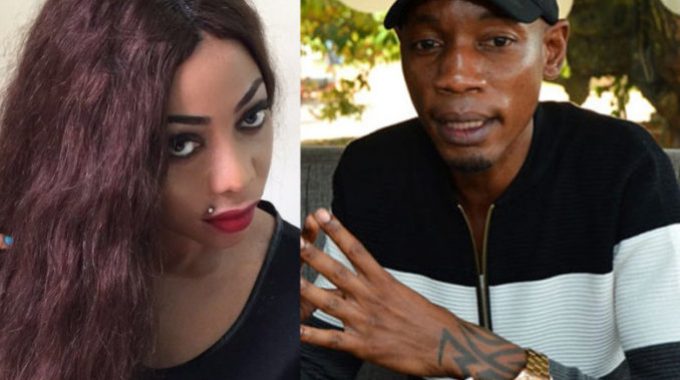 If there is any word that could ever be placed in the same sentence with Bad Black, trustworthy doesn’t qualify. When she kisses, she tells. You just cannot stop her mouth from spilling.

When she visited Bryan White a few days ago, Black cried a river, giving the impression that Bryan was badly off.

Days later, she is saying, Bryan is not sick. That, he, Bryan is feigning sickness with intentions to avoid appearing before the parliamentary Human Rights Committee which summoned him over allegations of human trafficking and sexual abuse.

“He is playing the victim; he is not sick. I wanted him to get better, but which patient makes a phone call while on life support?” Bad Black wondered.

“We are trying to collect money to take him to the hospital because he does not have it. I asked him if we can fundraise and he said I can go ahead when we started fundraising he called and said he is fine and still has money,” she added.

Bryan, however, released a statement revealing that he was not in need of financial aid.

“He does not need to go to IHK, he is waiting for results from the UK. He is home for treatment willingly!” part of the statement on Bryan’s official page read.

“Bryan does not need any financial assistance. He is very ok and is taking care of his bills, rather he needs just prayers. He is not broke, he left the hospital as he waits on his results and for the sake of his safety. If he were broke he has a lot of property to sell, but he is not broke. The issues he wants to discuss with the President are personal and based on their working relationship,” the statement added.

The socialite said that the comments from Bryan White have made her check and double-check if the former money bags is actually actually ill.

“That means whatever I saw when I went to visit him was state-managed. I called Frank Gashumba and he also confirmed Bryan White is not sick, he is depressed because they withdrew his police officers and he is broke,” she said.

Bad Black accused Bryan White of trying to remain relevant, which she claims is a very hard thing to do.

“I love Bryan White so much but he is hiding his political issues in us. If he is playing on our minds everyone should be told. When I visited him he was claiming to be badly off and could not speak, now he speaks on the phone that easily,” she claimed.

Asked about her relationship with Bryan white, the loose mouth Bad black revealed that Bryan white was just a one night stand.

“Jajja Mwami (Bryan White) was my customer. He was just a one night stand. that’s how we became friends,” Bad Black said.

Bad black advised the socialite to get up look for money instead of faking illnesses in public.

“He just wants to see Museveni. If he is not sick, let him wake up and accept brokenness. He should go work, I have also been in his shoes, I had money and it got finished,” she added.