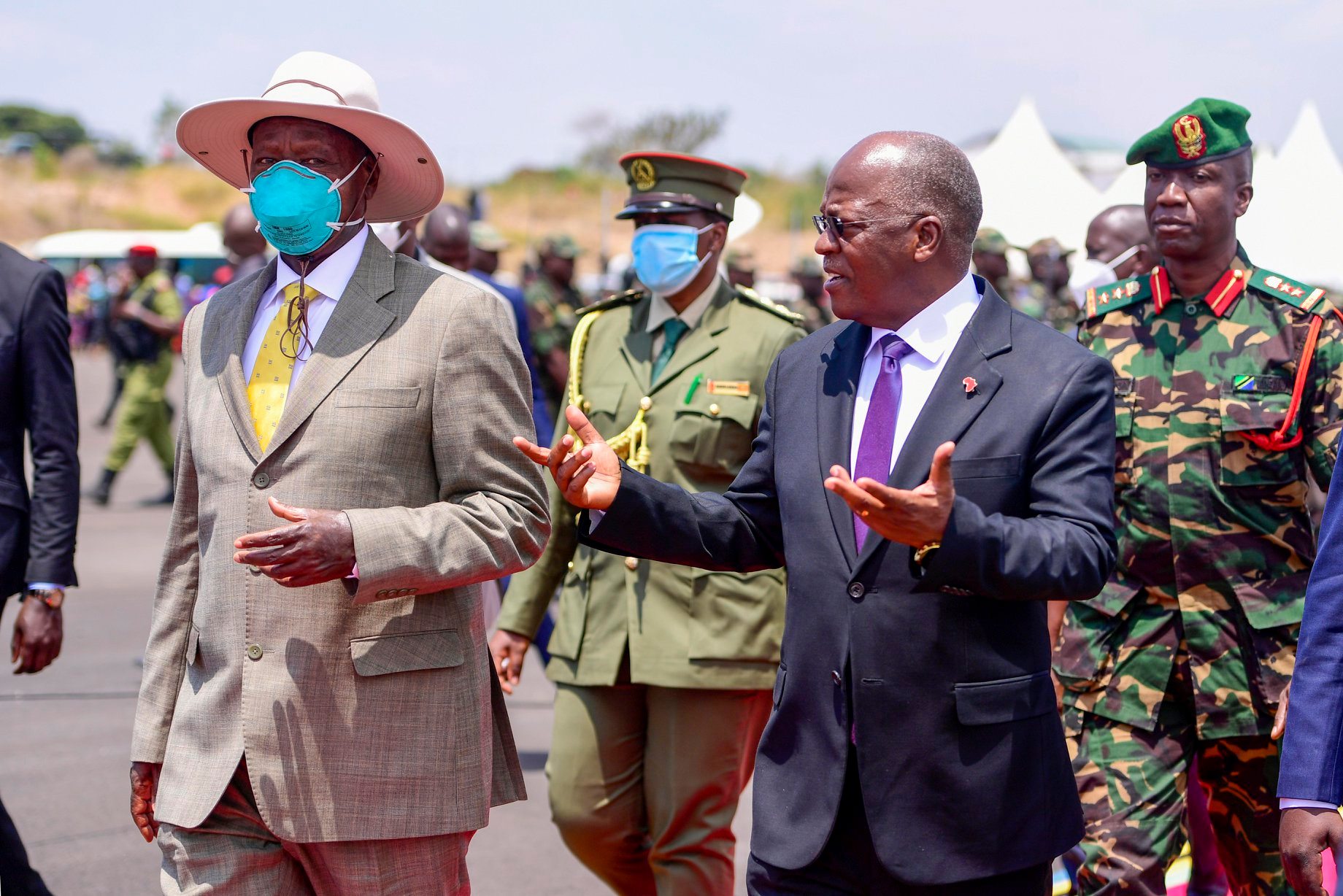 The Government of the Republic of Uganda and that of United Republic of Tanzania have signed the Intergovernmental Agreement (IGA) on the pipeline system of the East Africa Crude Oil Pipeline (EACOP) project.

The signing ceremony was presided over by the Heads of States, their Excellences President Yoweri Kaguta Museveni of Uganda and President Dr. John Pombe Magufuli of Tanzania at Chato district, in Geita region Northern Tanzania.

On arrival at Chato Airfield, President Yoweri Kaguta Museveni who was on a one-day working visit to Tanzania, was received by his Tanzanian counterpart, President John Pombe Magufuli.

Others at Chato Airfield to receive him were the Minister of Energy and Mineral Development Hon. Mary Gorett Kitutu, Attorney General William Byaruhanga, Ugandan Ambassador to Tanzania Amb. Richard Kabonero among others. The Ministers of Energy for Uganda and Tanzania, Hon. Mary Gorett Kitutu and Hon. Medad Kalemani jointly signed the Intergovernmental Agreement between Uganda and Tanzania.

The agreement has now cleared the way for the construction of 1,445km long Pipeline that will transport crude oil from Uganda’s oil fields in Hoima, to the Port of Tanga.

Speaking at the event, President Museveni said that the project has to begin with immediate effect for the people of the two countries to start enjoying the fruits endowed resources.

“Since we discovered the oil in Uganda, there has been a lot of debate and negotiations on terms to be applied, it’s good that all these have come to an end and now, we are ready for the project,” he said.

According to President Museveni, to begin with, the project is set to exploit 6.5 billion barrels of oil which is 40% of the total oil in the Albertine oil zone.

“The oil will be explored from the area covering 40 per cent of the total area that has been discovered to have that natural wealth. We have decided to start with it since it’s just the new area of investment,” Mr. Museveni explained.

President Museveni revealed that there had been long debates and negotiations between Uganda and other stakeholders on the amount of tax and other expenses, which delayed the commencement of the project.

To allow the timely commencement of the project, President Museveni said that Uganda had to forego a total of 800m US dollar revenue that was to be collected from the project for the next 25 years.

“Since it’s a new area, we decided to use the small area from where we will also be able to learn more for the sake of doing better in the next project,” he said.

In his remarks, President John Pombe Magufuli revealed that Tanzania will earn Shillings 7.5trillion and create more than 15,000 jobs over the next 25 years, or more from the project.

President Magufuli said that the project implementation will open up the region for further opportunities for trade and in turn fast track socio-economic development.

He commended President Yoweri Museveni, the Government and people of Uganda for working closely together to have this project reach this stage.

The agreement on the pipeline construction comes a few days after the government of Uganda and Total concluded and signed the Host Government Agreement (HGA) for the East Africa Crude Oil Pipeline (EACOP) project on 11th September 2020.

After the signing of the HGA, President Museveni promised to get in touch with his Tanzanian counterpart, Dr John Magufuli, to resolve other pending issues, especially concluding the Host Government Agreement in Tanzania, hence his one day working visit to Tanzania.

The Tanga route, according to feasibility studies, was deemed the cheapest for Uganda to transport its oil from the production point in Hoima to the international market. It has a convenient flat terrain, not interrupted by other activities, as well as lowest environmental challenges.

According to a joint communiqué read out by the Tanzanian Attorney general Adelardus Kilangi, the President of Uganda and the President of Tanzania agreed and directed that each state party expeditiously concludes the Host Government Agreement with the EACOP project company.

The Presidents also agreed that each state party commences negotiations of all pending project agreements with immediate effect and expedite the implementation of the East Africa Crude oil Pipeline project.

President Museveni and President Magufuli underscored the need to foster the welfare of the people of their respective countries in accomplishing the East African Community Integration as was conceived by the founding fathers of the two nations.