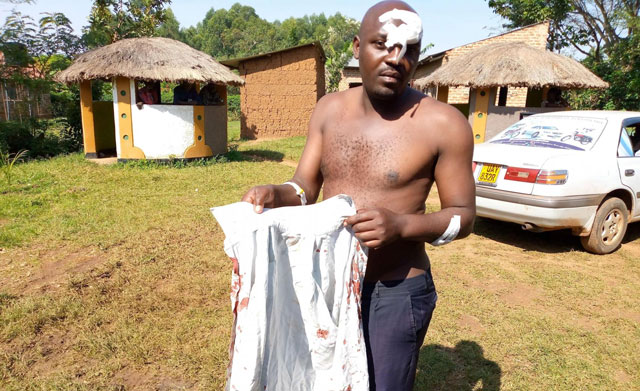 Police are investigating circumstances surrounding the death of 25-year-old Kevin Khabala, a resident of Nasasa village in Bumbobi Sub County in Mbale District.

Khabala is said to be a supporter of the incumbent Bumbobi Sub County LC V councillor, Peter Mweru who is vying for the same seat.

The deceased succumbed to injuries he sustained in an attack by the supporters of Mweru’s rival, David Mutsisa. He breathed his last at Mbale Regional Referral Hospital where he was rushed this morning.

Preliminary information shows that the deceased was riding a motorcycle together with three around 1 am this morning when they were attacked.

It is alleged that the four were distributing appointment letters to Mweru’s polling agents when they ambushed at Nasasa-Mungoma road junction.

Brain Buyola, a survivor of the attack, says they were ambushed by a group of youths armed with machetes and clubs, which they had hidden in the nearby cassava plantation.

He claims that the area LC I chairperson was part of the group that ambushed them.

Peter Mweru, whose supporter was killed told journalists that he had just completed a planning meeting with his supporters on how to manage the polling day only to be called that some of his supporters had been injured in an attack. He says the killing of his agent has demoralized him.

Olive Namudoola, the Officer in Charge of Nabumali Police station who Uganda Radio Network found at the scene of crime, said that they have arrested two suspects in connection to the attack.

She says the supporters of the rival camp met at a junction and started clashing.

David Mutsisa, whose supporters are accused of attacking the supporters of the rival camp, hasn’t commented on the matter as he couldn’t be reached by the time of publishing this story.