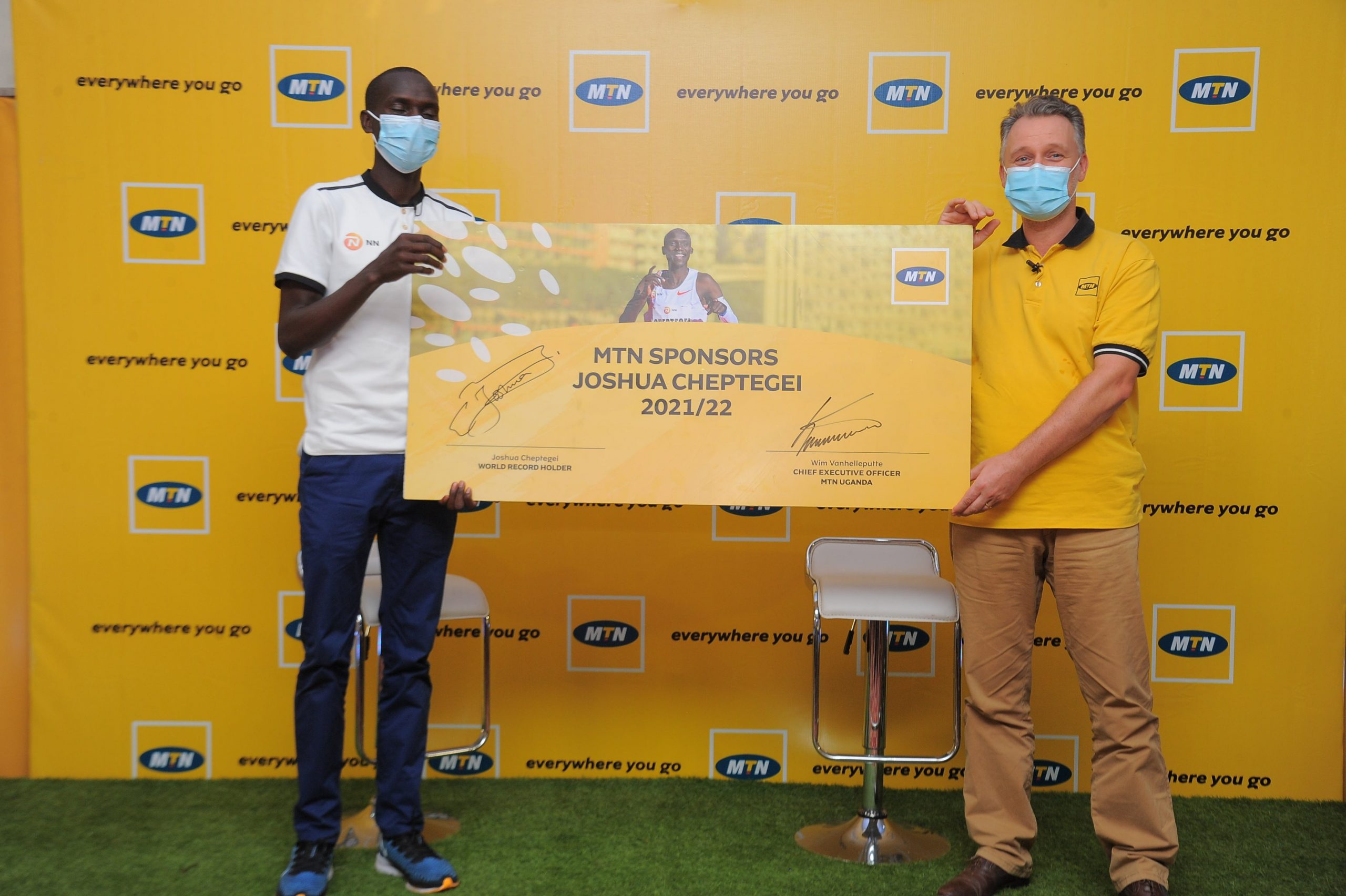 Following several years of support to athletics in Uganda, Cheptegei becomes the first individual athlete to ink such a deal with the telecom giant.

As part of the sponsorship deal, the teIecom company also announced shs100million contribution that will go towards the Cheptegei Foundation, an organisation started by the athlete to develop young athletics talent in the country. The foundation is based in Kapchorwa.

In addition, MTN also announces a performance package for the athlete if he wins an Olympic Gold, or any other medal at the 2020 Summer Olympics in Tokyo. There is also a performance incentive for any other world records he breaks.

Speaking at the press conference to announce the sponsorship package at the Mbale Resort Hotel today, MTN Uganda Chief Executive Officer, Wim Vanhelleputte said that the telecom company could not hide its joy after its several years of investment in the sport started bearing fruit in such significant ways as Joshua’s recent exploits.

“We are very proud and honoured to announce this sponsorship deal for Joshua. At MTN, this is the next best thing we can do after several years of investment in developing athletics talent and sport in this country. Through the renowned MTN Kampala Marathon and other Uganda Athletics Federation (UAF) programs, MTN has supported the sport for over 15 years. And it is paying off. What Joshua is doing for the country is awesome and deserves to be recognized especially by his country,” Vanhelleputte said.

“Last year, MTN rewarded Joshua with a big cheque when he broke the 5000 meters record. We promised him bigger things if he continued his winning streak. We also promised to get involved in his Foundation, to help build his legacy. So, here we are again, fulfilling our pledge to him. This, I know will inspire him to go further in his career. It will also inspire other athletes to aim higher. I call upon other companies to join us in this as we inspire a greater nation,” Vanhelleputte further said.

Since 2004, MTN, in partnership with the UAF has been a part of the development of Uganda’s athletics right from the grass roots; And, it is from this partnership, that the Federation is steadily growing Uganda’s reputation as a track and field athletics powerhouse.

Through the UAF programmes and the MTN Kampala Marathon, a lot of bright talent has been identified and gone on to shine at various world championships.

Joshua’s rise started way back in 2014 when he won the World Junior Championships in Eugene United States. He became the African Junior Champion the following year, in Ethiopia. He thereafter had some quiet years before bursting onto the international stage in a powerful way, when he won in the 5000m and 10000m races at the 2018 Commonwealth Games in Australia. Joshua’s star continued to rise in 2019 when he clinched gold at the World Cross Country Championships and World Championships in Aarhus, Denmark and Doha, Qatar respectively.

Apart from Cheptegei, Uganda boasts of other remarkable champions like Halima Nakaayi – the 2019 World Athletics Championships 800m Gold Medalist, Jacob Kiplimo – the 2017 IAAF World Cross Country Junior champion, 2012 Olympic Marathon champion and 2013 World Championships gold medallist Stephen Kiprotich and Dorcus Inzikuru, one of the pioneer participants at the maiden MTN Marathon in 2004, who won the inaugural 3000m women’s steeplechase world title, as well as the first Commonwealth title in the event and many others.

“We are inspired by the results we are seeing in the sport and so reiterate our commitment to continue supporting activities of the UAF and to restore the MTN marathon as soon as we overcome this COVID pandemic and the restrictions it has had on some of these sporting activities,” Vanhelleputte said.

MTN Uganda is a fervent supporter of Uganda sports and has over the years supported various disciplines including athletics, football, basketball, golf, and many others both at national and club levels.