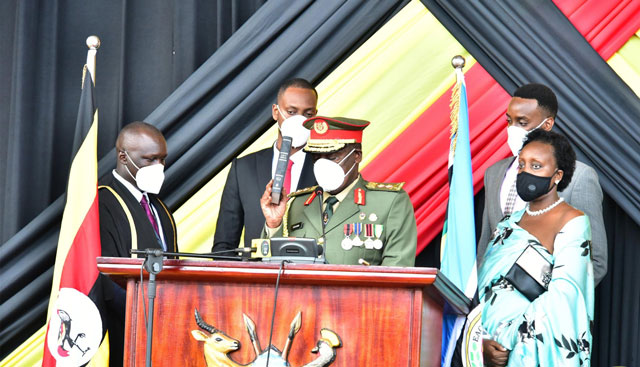 Three members-elect of the 11th parliament repeated their oaths on Wednesday after faulting in the initial oaths administered at Parliament earlier.

They include Bubulo East MP John Musila who used the Rastafarian word ‘Jah’ instead of God, Hoima City MP Asinansi Nyakato who used Commander as her third name, contrary to what appears in the gazette and Maj. Gen. Sam Kavuma, who had missed some of his military peeps by the time he presented himself for the swearing-in ceremony.

On Tuesday, Entebbe Municipality MP Michael Kakembo was forced to repeat his oath after using the title Ssalongo in the oath, while Budadiri West MP James Nathan Nandala Mafabi added an unofficial name ‘Majegere’ as he took the oath. However, he was not stopped by parliament officials.

Under the law, taking an oath using names that are not gazetted presents one as a different person, and would imply that the person taking the oath is not the one who was voted for by the population.

Meanwhile, the Wednesday swearing-in ceremony was full of colour as more and more legislators turned up to take oaths. Among them were several officers of the army who were elected to represent the UPDF in Parliament. These include the Commander of Defence Forces (CDF) Gen. David Muhoozi, his deputy Lt. Gen Wilson Mbadi Mbasu, Maj. Gen Henry Masiko, and Col. Dr Victor Nekesa, among others.

Also sworn in on Wednesday was former Minister Esther Mbayo, the Luuka District Woman MP who said that her term of office would be used to empower voters especially the Youths to eradicate poverty.

Hope Nakazibwe, the Mubende Woman MP said that she is to focus on the land issues affecting her constituents.

Rachel Magoola, the Bugweri Woman MP also promised to create employment for the youths through government programs, while Milton Muwuma, the Kigulu South MP said he will focus on the demand for a University in Busoga to improve education standards.

The swearing-in process concludes tomorrow Thursday with 131 members scheduled to be sworn in.