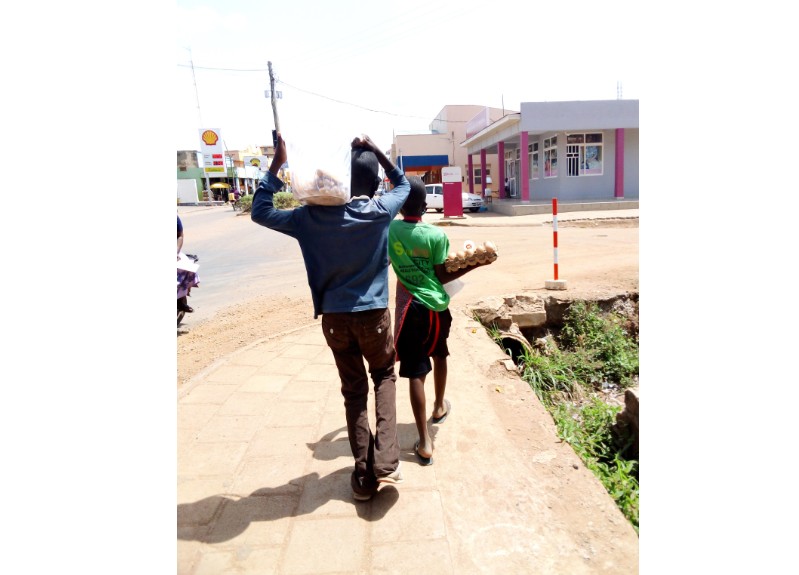 With over a total population of over 5 million Ugandan children at risk of being forced to work as families are pushed towards extreme poverty as a result of the second COVID-19 lockdown imposed on the 18th June 2021, hundreds of children aged below 15 years in Soroti have been forced to beg, wash cars and sell small items as an avenue of survival.

According to Albert, other names concealed for safety purposes he hawks eggs each day for over 8 hours, which he sells for 500 Ugandan shillings apiece.

With strict observance of SOPs Albert says, he sells a minimum of 4 trays of eggs each day that helps him and his family to survive.

“I do my work with strict observance of SOPs to avoid police enforcing the lockdown,” Said Albert but acknowledged that life on the streets is tough.

One Francis Xavier 14 who deals in the sale of face masks also explained that, “Business is not good but I have to struggle if I don’t come to sell then we shall not have enough food at home.”

On average Francis Xavier sells 50 face masks at 1,000 Uganda Shillings which he purchases at a pharmacy within town at 20,000 Uganda shillings each box.

I’m feeling very bad because right now I should be in a lesson,” Francis told this reporter

Soroti City and district have registered 91 cases of child labour with hundreds unreported, according to the report from Soroti Probation office.

“Most parents and guardians culturally believe that, through over working their children they contribute towards family development economically and is not a punishment.” According to Amos Oluka the Sorot Probation officer.

“The pandemic has hit families hard, many children are forced into exploitative work, these consequences may seem dismal but disastrous,” Oluka said.

Ismail 13, who works with his father One Kengere Olupot in a stone quarry in Opiyai rock in Soroti City told this website that his father advised him to join stone quarrying because he lost hopes of schools reopening.

He described the work as hazardous because he gets injuries from flying stones, including sharp particles that got into his eyes.

But his father, Olupot, told this website that he has decided to engage his son in stone quarrying so that he can gain survival skills.

“Life has become so hard,” said another parent whose daughter deals in hawking roasted cassava and juice but preferred to be anonymous for fear of being arrested.

Simon Peter Edoru Ekuu the Soroti District LCV chairperson told this reporter on Thursday morning that, the economic impact caused by the Covid-19 pandemic, together with school closures and inadequate government assistance, has pushed hundreds children into exploitative and dangerous child labor.

While appealing to the Government to fasten the process of providing support to the hard hit families and pledges to work with the district council to formulate the ordinances that may block parents from abusing the rights of their children.

Paul Omer the Soroti City East Division mayor encourages the government to go beyond policies and address the conditions that push the child into child labour activities like poverty among families.

“The government should get children out of risky labor situations and increase cash assistance to families to prevent further increases in poverty and child labor,” Said Omer.

Uganda’s Prime Minister Robinah Nabanjja recently while addressing the media said the government has planned to give aid to the vulnerable Ugandans through Mobile Money.

Aggrey Kibenge, the Permanent Secretary of the Ministry of Gender Labour and Social Development during the events to mark the commemoration of World Day against Child Labour said the country is not lacking laws and policies against child labour but there is a need for collective responsibility.

He said following the closure of the school, cases of child labour will be rampant in communities.