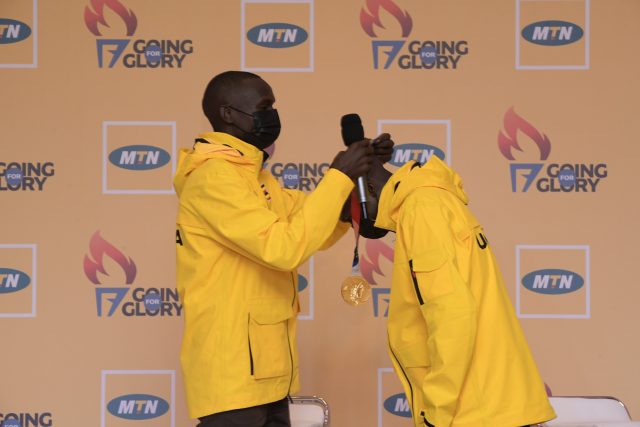 Olympic Champion Joshua Kiprui Cheptegei has given away one of his Olympics medals to former gold medalist Stephen Kiprotich.

Cheptegei who was speaking on Friday morning at a breakfast organized by MTN Uganda to recognize the Uganda Olympic team thanked Kiprotich for providing them with the inspiration that has seen them scoop four medals from the Tokyo 2020 Olympics.

In the games that ended last weekend, Uganda came second in Africa behind their East African counterparts Kenya.

Jacob Kiplimo won a bronze medal in the men’s 10,000m, a race where Cheptegei also won Silver, bagging a double from the games.

At the breakfast event that was held at Sheraton Hotel in Kampala, MTN Uganda rewarded the medalists, other members of the athlete’s team, coaches and the entire administration of the Uganda Olympics Committee.

Other members who participated but didn’t win were also recognized and given a token of appreciation amounting to UGX 2,000,000, coaches got UGX 1,500,000 while the administrators got UGX 1,000,000.

Kissa was a pace setter in the men’s 10,000m race where Cheptegei won a silver medal.