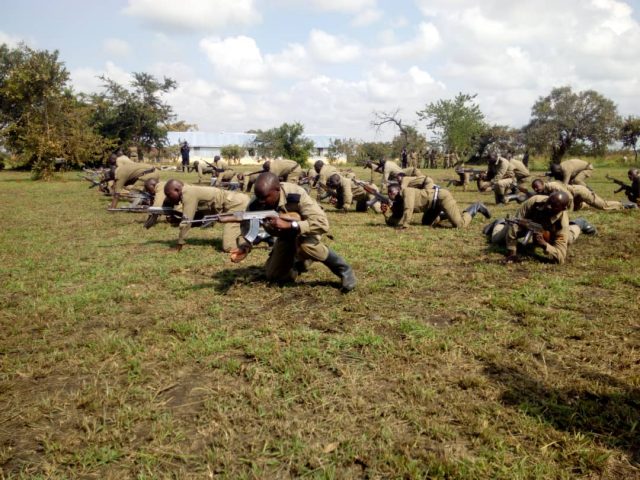 Mr. Golooba made the revelation on Friday evening during the passing out of 173 DPC’S who have been undergoing intensive training in Police (Counter Terrorism) Training School Olilim in Katakwi district.

While delivering his speech to the DPC’S, Afande Golooba said, the institution of Police will announce the placement and transfer of officers within two weeks in order to enhance service delivery.

He said the transfer or placements are normal and called on all officers to act with immediate effect.

“We shall be announcing your placements or transfers within two weeks of your pass leave. As Police chiefs we have agreed to give you two weeks pass-leave before you get your transfer letters. Those who are lucky will remain,” said AIGP Golooba.

Golooba also warned the officers against corruption saying the police is going to deal with its officers who will be found acting in contrary to the Police ethics.

“We shall not hesitate to dismiss someone for his/her corrupt tendencies. Corruption is the vice killing our country and I expect you to be clean,” he said.

He also called of the DPC’s to clean up their areas of operations urging that Violation of human rights must stop and any officer who is found violating the rights of Ugandan citizens must be arrested and charged.

“Make sure that no one is beaten but rather use reasonable force. All suspects must be produced in court within the 48 mandatory hours. The force shall also act on Officers who mismanage civil matters,” he added.

The Police chief also warned the officers against laxity in handling Assignments, slow response to emergencies, poor customer care among others.

“If you can’t be with us then rather leave the force. Any errant officer shall be dealt with according to laws,” he added.

The police director of operations AIGP Edward Ochom who was also present during the pass out, urged the officers to minimize cases of crime noting that in some cases police are to be blamed for there Lacity on averting crime.

“You must go have good relationship with the public. I urge you to go and confront the challenges in the field. Be aware that the community we are dealing with isn’t the community of 1980’s, this people are informed, so go relate with them,” he challenged.

SP Kihamba Joseph who represented the DPC’S pledged to work closely with the public in reducing crime.

Rt. Sgt. John Elakat the area LCI for Osemwa village called of the police to deploy heavily in the border line between Teso and Karamoja saying that the Karamojong rustlers have continued to raid Iteso there cattle.

He also asked the police to put in place stringent laws against the idlers whom he said of not well handled may cause insecurity in the country.

“Most idle youth now dream to be President’s of this country and this one is a source of insecurity. There role model is Bobi Wine,” Elakat said.