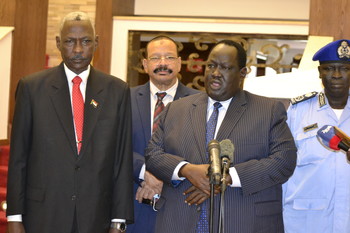 A high-level delegation from Sudan headed by the Defense Minister, Yasin Ibrahim, arrived in Juba on Wednesday to participate in the joint security meeting between the two countries.

The joint high-level security committee is expected to discuss security matters between the two countries, as part of the follow-up on the recent memorandum of understanding signed last month where the two countries agreed to open up land crossings, river transportation, and railway to enhance the cooperation agreement.

Ibrahim said the Sudanese government remains committed to putting all efforts towards realizing peace and stability and the prosperity of the two nations.

“I came along with all our teams to follow up on how to operationalize all that has been agreed upon during the recent visit of our Prime Minister Abdallah Hamdok, including the opening of the border crossings, sharing security information. We are here looking forward to the implementation of resolutions of the agreements of the previous visit,” Ibrahim said.

“The delegation consists of all the heads of the security organs, including National Security, Military Intelligence, Police and Customs,” Galuak added. “Our president has instructed us to discussed all other issues that will be beneficial for the people of both countries, all obstacles should be removed.”