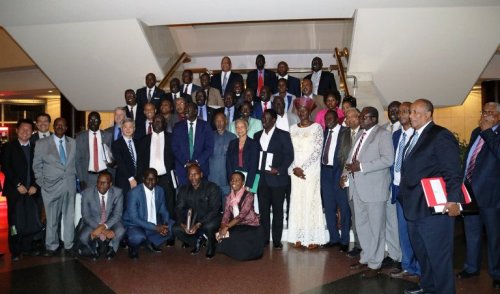 South Sudan’s peace monitoring body (RJMEC) has warned that raging subnational conflicts in the countryside undermine implementation of the peace accord.

Speaking during the third anniversary of the revitalized peace agreement signing, Charles Tai Gituai, the Interim Chairperson of RJMEC said it was time leaders to the agreement commit themselves to the full implementation of the peace deal, citing the frustration among citizens.

“There is a sense of frustration prevalent among the people of South Sudan due to the slow pace of the implementation of the Agreement. As victims of the protracted conflict, the people of South Sudan deserve better and must enjoy sustainable peace and development. Outside of Juba, numerous and ongoing incidences of insecurity and subnational conflict undermines the aims and spirit of the agreement,” said Gituai.

“We can only say we have peace when all South Sudanese people enjoy living in a peaceful environment, wherever they may be in the country”, he added.

Gituai commended the parties for reconstitution and swearing-in of the Transitional National Legislative Assembly (TNLA) and the Council of States, and their members.

He added, “Beyond this, many other important legislations await, inter alia: the National Elections Act, the Anti-Corruption Act, the Non-Governmental Organization Act, the Public Finance Management and Accountability Act, and the Bank of South Sudan Act. It is essential that the members function as representatives of their constituents from the diverse communities of South Sudan”.

RJMEC is mandated, under the provisions of the September 2018 peace agreement, to monitor, oversee and support the implementation of the accord.