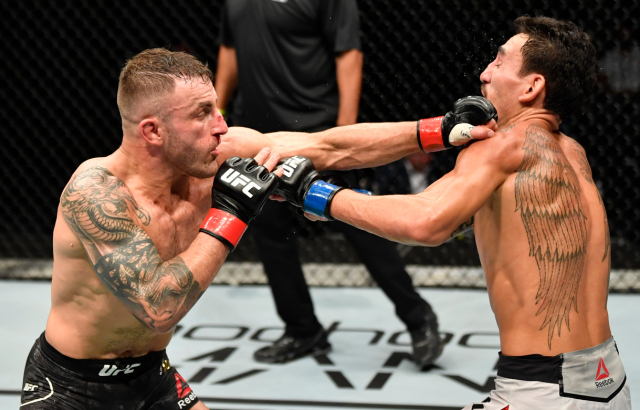 SuperSport viewers on DStv can look forward to seeing Ultimate Fighting Championship action as UFC 266 takes centre stage at the T-Mobile Arena in Las Vegas on the morning of Sunday 26 September 2021.

SuperSport is your #HomeOfSport and the ultimate destination for fans of Mixed Martial Arts action.

Alexander Volkanovski and Brian Ortega will have a grudge match for the UFC Featherweight Championship in the headline bout. Volkanovski (22-1), the reigning flyweight king, will be seeking a second successful defence of the belt after beating Max Holloway via split decision in his last trip to the Octagon in July of last year.

The Australian also beat Holloway via unanimous decision to win the title in December 2019 and is on a 19-match winning streak (nine in the UFC) in his professional MMA career.

Ortega (15-1, 1 NC), meanwhile, comes into the fight on the back of a unanimous decision win over Chan Sung Jung ‘The Korean Zombie’ in October last year. This will be the 30-year-old’s second shot at the featherweight title, having been beaten via TKO (doctor’s stoppage) by Holloway in December 2018.

Adding further interest to this clash is the fact that Volkanovski and Ortega have been head coaches for the UFC television contest ‘The Return of The Ultimate Fighter: Team Volkanovski vs. Team Ortega’. And this experience has seen Volkanovskicome to the conclusion that his opponent has a low fight IQ.

“I’ve certainly learnt more about him,” said the Australian. “I don’t want to sound cocky but (during filming) you could hear him explaining things to his fighters, he was saying the right things without totally understanding it.

“I think he has watched, say, my last couple of fights with Max Holloway and said to himself ‘OK, I need to change my game’. So now he’s trying to understand what the top guys are doing. Not only in our division but others.

“I feel like his team has said ‘we’ll work on this, this and this’. So, right now, (Ortega) thinks he understands this chess game we’re about to play. But he’s going to realise – and real quick – that he doesn’t.”

The Women’s Flyweight Championship will also be up for grabs, with Valentina Shevchenko looking for a sixth straight successful defence of the title when she takes on Lauren Murphy.

Shevchenko (21-3) is undefeated since September 2017 and emphatically stopped Jessica Andrade with a second-round TKO in her last fight back in April of this year.

Murphy (15-4) has earned her first title shot after racking up five straight wins. The 38-year-old American is very much the underdog against the relentless Kyrgyzstani-Peruvian champion, but she believes an upset could be on the cards.

“That goal post has been moved so much throughout my entire career, and so that’s always the question I’m always asking myself is, ‘What am I capable of?’ Over the last 10, 12 years, I’ve surprised myself and the people around me, and it’s been an incredible journey,” Murphy explained. “I don’t think it’s going to end [at UFC 266] either. I really believe I’m capable of amazing things.”

The main card also features Nick Diaz facing Robbie Lawler in a five-round welterweight fight, with the pair meeting 17 years after their first fight back in 2004 at UFC 47 (Diaz won by KO); Curtis Blaydes will be looking to bounce back to winning form in a heavyweight match against JairzinhoRozenstruik; and the opener is a women’s flyweight battle between Jessica Andrade and Cynthia Calvillo.

No rival can compete with SuperSport’s coverage. Our viewers on DStv can see all their favourite fighters from the African continent and around the world strutting their stuff in the UFC.

Visit www.dstv.com to subscribe or upgrade, and join in on the excitement. And while you’re on the move, you can stream the action on the DStv App.