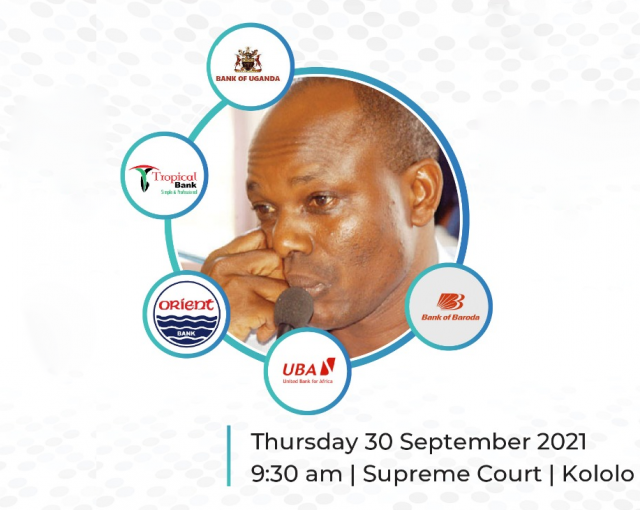 If Legal Brains Trust gets its way, four foreign-owned banks will have to cough up over Shs 500 billion (USD 139 million) in refunds to the Uganda Consolidated Fund Account, interest, damages and legal fees, and many more members of the Uganda Bankers Association might want to look over their security archives to see whether they don’t also have any of the “impugned letters of comfort” from the Bank of Uganda governor — whose constitutionality the Supreme Court reviews on Thursday, 30 September 2021.

Led by Chief Justice Alphonse C. Owiny-Dollo, the seven justices, who are on the Coram for this 10-year old case of market land grabs in Kampala city and political and commercial skullduggery in the corridors of power, will decide whether to correct and adjust the remedies that were provided by the Constitutional Court on March 23, 2020 when it referred the matter to the High Court for “ascertainment of the amount” owed to the taxpayers of Uganda by the beleaguered tycoon, Hassan Basajjabalaba and his Haba Group of Companies — a move that was strongly condemned by the anti-corruption campaigners who filed the matter on February 27, 2012.

The Constitution forbids the creation of loans and guarantees on behalf of any person or authority, without parliamentary approval.

Between them, the four banks regulated by the Bank of Uganda — United Bank of Uganda (UBA), Tropical Bank, Orient Bank and Bank of Baroda — altogether issued “a series of short-term loans” of about 46 million dollars (Shs 163 billion) to Haba Group during the financial year 2010/2011 without any of the usual securities.

They instead relied on a short and seductively titled “letter of comfort” issued by the central bank governor, and when the Haba Group predictably defaulted, the bankers swiftly turned to the national treasury for their “comfort”.

The primary question for constitutional interpretation is whether “parliamentary approval” was one of the essential requirements that the banks should have asked for before participating in this high risk venture, using depositors’ money to pad up a businessman.

The Constitutional Court found that parliamentary approval was necessary, but it failed to nullify the “letters of comfort” or to direct the errant bankers to refund the illicitly obtained public funds. Will the Supreme Court do rule differently?

Besides Basajjabalaba and his 5-member Haba Group of Companies, the other parties to the appeal are Attorney General Kiryowa Kiwanuka, the Bank of Uganda and its governor Prof Tumusiime-Mutebile, 2 former ministers Syda Bumba and Prof Kiddu Makubuya, and the 4 commercial banks Orient, Tropical, UBA and Baroda.

Legal Brains Trust argues that they all knowingly facilitated the questioned transactions for private gain, and to the detriment of the Ugandan citizens, for whom these funds would have availed the much-needed medicine in rural hospitals, long-awaited salary enhancement for teachers, judicial officers, and other vulnerable civil servants, as well as sanitary towels for girls, among other social amenities.

“The Constitutional Court failed in its duty to provide an effective remedy which, in our view, would comprise a refund of taxpayers’ money by the foreign banks, interest, damages and costs,” said advocate Isaac Ssemakadde, who is representing the anti-corruption watchdog Legal Brains Trust in the monumental appeal.

Although the President and the Judiciary participated in a historic walk against it on 4 December 2019, the scourge of corruption continues to deplete the public treasury.

“The case is potentially precedent-setting. Whatever the outcome, judgment in this appeal will definitely have far-reaching consequences on the degrading and deplorable marriage of convenience between Uganda’s political and finance elites,” said Ssemakadde.