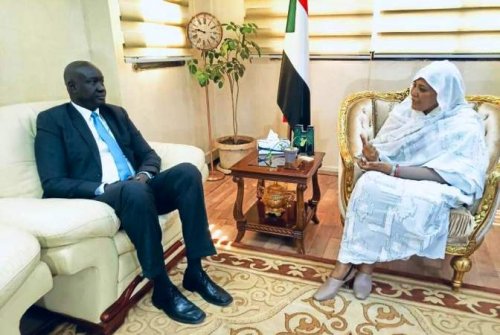 “The citizens of the two sisterly countries are bonded by blood, shared history, and common border. The fact that we drink from the same source, the Nile makes us inseparable and that means a stable Sudan also a stable South Sudan”, said Mayiik Ayii Deng in a statement to the Sudan Tribune on Friday.

Deng was one of the senior officials dispatched by President Salva Kiir to deliver a special message to the Sudanese leadership following a botched coup in Khartoum, drawing a wedge between the military and the politicians backed by the citizens opposed to military rule.

“We all fall and rise together as one people. At this critical time the people of South Sudan firmly stand together with Sudanese people and the current leadership of the Transitional Sovereign Council to ensure that democratic gains brought about by the December Revolution are not reversed,” he added.

“This visit by South Sudan high-level delegation is a testament to the commitment to see to it that the Republic of Sudan remains on the path of peace”, he said.

The minister further pledged to support without reservation the full implementation of the peace agreement in Sudan, pointing to the significance of the agreement to the survival of the two countries.

In the past years, President Kiir said he wanted to mediate peace in Sudan and pointed to the Sudanese and South Sudanese armed groups on the border areas saying they are poisoning stability in the two countries.

South Sudanese foreign affairs and international cooperation minister told Sudan Tribune on Friday he has held fruitful meetings and engagement with relevant institutions as well as officials including his Sudanese counterpart, Mariem al-Mahdi with whom he had lengthy discussions.

“Our visit to Sudan is a successful mission. We have met all the key and relevant officials, including the chairman of the Sovereign Council, his excellency, Gen. Al Burhan to whom we delivered a special message from his Excellency and a brother and a colleague on all fronts, Gen. Salva Kiir Mayardit. The message was warmly received with great gratitude from the Sudanese leadership,” he said.

The visit is one of the first missions the new minister undertook since his appointment as the minister of foreign affairs and international cooperation.

The South Sudanese delegation continued until Thursday to hold a series of consultations and discussions with members of the Sudan Transitional Sovereign Council and Ministers in the Civilian State Government.

The head of the delegation also who serves as the Chief Mediator urged the Transitional National Government of Sudan to focus on peace and stability for the betterment of the country.