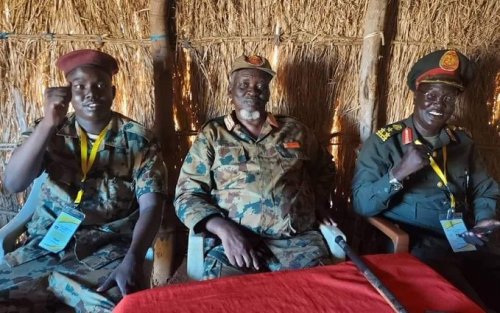 The interim leader of the armed opposition (SPLM-IO) splinter group, General Simon Dual Gatwech has clarified that his group is not after positions, but pushing for full implementation of the security agreements.

“We are not after positions. The Kit Gwang Declaration is advocating for the honest implementation of Chapter II: Ceasefire and Transitional Security Arrangements. It is the contention of the SPLM-IO (Kit Gwang) that the Security Arrangements are central to political stability in our nascent Republic. The Kit Gwang Declaration, through implementation of Security Arrangements, aspires to restore the dignity of the South Sudanese peoples by addressing the problem of political violence in our land”, the group said in a statement released ahead of scheduled talks with South Sudan government.

It called on the peoples of South Sudan, the Intergovernmental Authority on Development (IGAD), Troika and all the stakeholders in the peace agreement, to recognize the position of his group, saying it is a recommitment to an honest implementation of the agreement for peace to prevail in South Sudan.

“We are not after government positions perse; we are searching for genuine peace. We further call on friends of South Sudan to not give up on us at this critical period”, the statement reads in part.

According to Gatwech, the memories of the deadly civil wars that erupted in the country in December 2013 and July 2016 are still too fresh to be ignored.

“The traumatic effects of 15th December 2013, and the “dog fight” at J1 (State House) on the 8th of July 2016, are still fresh in the collective psyche of our displaced civil population. This is why we must prioritize and expedite the implementation of Chapter II: Ceasefire and Transitional Security Arrangements – commonly referred to as Security Arrangements – and other key provisions of the Arrangement that have been neglected by the Juba Group. We must end the perennial violence that has plagued our politics through the sincere implementation of the negotiated settlement – the Revitalized Agreement on the Resolution of the Conflict in South Sudan (R-ARCSS),” argued Gatwech.

He added, “It is only after this that the parties to the Agreement can be able to address all matters pertaining to peace as stipulated in that book”.

Separately, Mabior Garang de Mabior, a member of the splinter faction of the armed opposition claimed forces loyal to the First Vice President Riek Machar were on rampage in Upper Nile State, despite recent calls for dialogue.

“The forces loyal to the FVP (First Vice President) are still on rampage, marauding through Greater Upper Nile, in a futile attempt to resolve the split in the SPLA/SPLM (IO) using military violence. We call on CTSAMVM to investigate this series of attacks by the SPLM-IO Juba in violation of the resolutions of the 73rd Extra Ordinary Session of the IGAD Council of Ministers,” he wrote on Facebook.

The communique, Mabior said, called for peaceful resolution of the split in the SPLM-IO.

“The Kit Gwang Declaration is for peace and our negotiating position is Security Arrangements, we are categorically anti-war”, he further stressed.