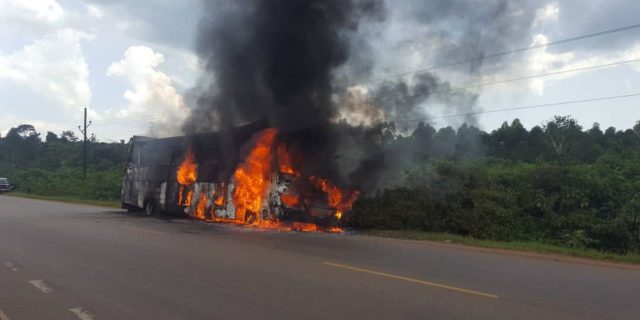 Government through the Ministry of Internal Affairs has come out to comment on the Tuesday afternoon bus fire along Kampala Masaka road.

The bus Reg No. UAU 926U caught fire at Kampilingisa in Mpigi District while it travelled from kampala headed to Kabale, Western Uganda.

It was reported that the fire originated from a mechanical problem with the bus’ braking system but according to State Minister for Internal Affairs Gen David Muhozi, government will investigate further to find out if the fire is in any way related to the recent terror attacks.

“We know that the bus developed a mechanical problem, driver stopped, passengers alighted but it got burnt. We shall ascertain whether it is related to the recent spate of bombs,” Gen Muhoozi told parliamentarians on Tuesday afternoon.

The incident comes two weeks after an explosion in another bus that was leaving Kampala headed to Western Uganda.

In the explosion which was ruled as a terror attack, a one Isaac Matovu, a resident of Kamuli A Zone in Kireka, Wakiso District died on spot.

Matovu is believed to have been a suicide bomber. His alleged accomplice who had disembarked the bus was arrested at the weekend.