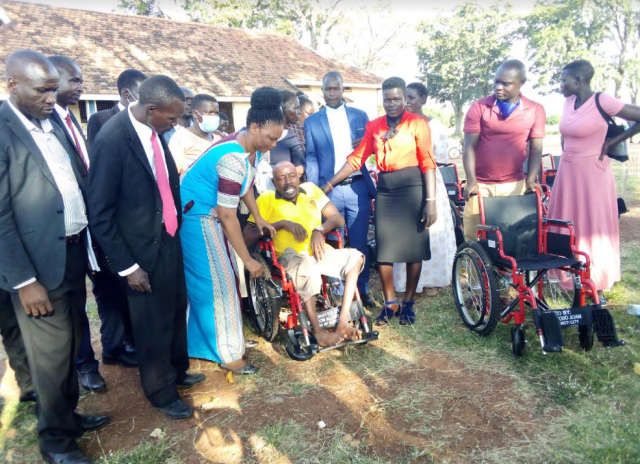 The Soroti City Woman Member Of Parliament Joan Alobo was on Wednesday Evening left in shock after realizing that Soroti City West Division had only allocated Uganda Shillings 800,000 to cater for the needs of the PWDs in the current financial year 2021-2022.

The MP who is currently in Soroti City monitoring several government programs was left in shock after the Soroti City West Division Mayor Peter Patrick Emaru revealed that the council only approved Shs 800,000 to cater for the needs of the PWDs.

Soroti City West has over 100 registered PWDs ranging from Visually Impaired, Those with mobility problems, Hearing Impairment among others.

According to the Emaru, whereas the division allocated the 800,000 Shs budget for the PWDs the funds are not sufficient to provide for the basic needs of the PWDs.

Joan Ameso the Councilor representing PWDs in Soroti City West Division told this reporter that it’s disappointing to note that PWDs are being considered last in all developmental programs yet those without any problem are well catered.

She reveals that even in getting services in the health facilities that PWDs are not given priority while most of them are denied services.

She notes that the 800,000 Shs that the council allocated is too small to cater for the needs.

She wondered what the 800,000 Shs can do, yet the price of a tricycle is at 700,000 Shs each while appealing to the government to offer more support to PWDS.

But while delivering her speech MP Alobo expressed her displeasure with the Division authorities saying that it’s not proper for council to only approve 800,000 Shs yet there are more persons with disabilities who need government support.

She also called on the Central Government to revise the budget on PWDs while putting special consideration of Visually Impaired Persons and those with Mobility challenges.

The MP also who was informed by the Division Male Councilor for PWDs Anthony Omaje also expressed her displeasure with the authorities for failure to PWDs on government payroll.

MP Alobo however out of discontent donated a total of 20 tricycles to support the needy PWDs who cannot connect to nearby places for support due to mobility problems.

She also vowed to pressure the government to give necessary support to PWDs.