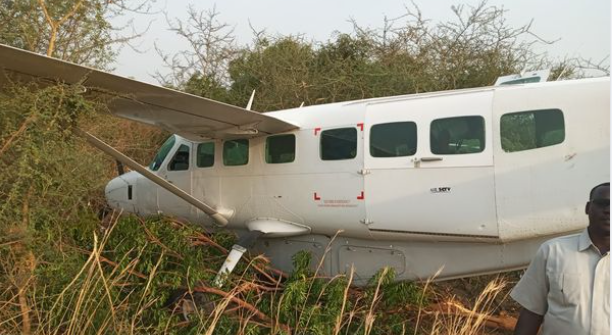 Yet another small passenger aircraft crash-landed at an airstrip in Akobo County of Jonglei state on Friday.

Kuot John Akec, the director of Bor airport, said on Monday that the incident occurred as the plane carrying passengers from Juba veered off the runway when its right rear tire got punctured while it was trying to land in Akobo on Friday.

“The plane involved in the incident is a small aircraft (Cessna caravan) with a capacity of 12 passengers. During the incident it was carrying goods, 6 passengers and 2 crew,” Kuot said.

“What happened was that the plane skidded off the airstrip to the right as it tried landing because there was a puncture on the right wheel.”

The airport director said investigations are ongoing into the incident.

“The investigation is ongoing. The plane is of the same type (Cessna caravan) and from the same company involved in the incident in Bor a few days ago. The good thing is that there were no injuries, only the plane’s right wing was damaged,” he said.

For his part, Tuong Majok, state cabinet minister, said they are shocked by the crash and he called on the country’s aviation authorities to inspect all aircraft.

“It should not be about having many planes in the country, we should have a few planes that are safe,” Minister Majok said. “The aviation authority should inspect all the aircraft so that the outdated ones are grounded.”

On 22 February, a small aircraft from the same company skid off the runway in the Jonglei State capital, Bor.

Cases of planes crashing in the country have been on the rise recently with the latest case being reported in November 2021.

Earlier this month an Antonov SP-402 plane hired by the education ministry to transport examination papers crashed at the Agok airstrip.