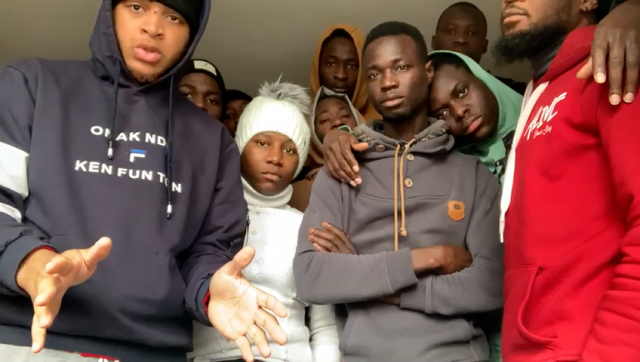 As war came to Ukraine, thousands of Africans were among the more than five million refugees who fled the conflict.  But even as they attempted to escape the carnage, many Africans were treated like second class citizens.

Reports of discrimination at Ukraine’s western borders were widespread, and acknowledged by the UN High Commissioner for Refugees. BBC Africa journalist, Peter Okwoche, was at the Polish border reporting on the African experience days after war broke out.

In the weeks that followed, BBC Africa Eye followed the story of the Africans struggling to find a way out of Ukraine amid a bloody war.

As the conflict intensified, reports started to surface across social media about the discrimination Africans faced at the borders, we spoke to Dr Awofaa Gogo-Abite a Nigerian surgeon who lived in Ukraine for almost 14 years. He filmed his escape and says he and other Africans were stopped from crossing the border with Poland while Ukrainians were allowed passage. He says they were held up for 18 hours. On social media videos appeared to show similar blockades for Africans and included footage of Africans apparently being denied access to trains evacuating refugees to neighbouring countries.

Peter reported from Przemyśl, a small Polish town on the Ukraine border and was taken aback by the scenes he witnessed. “I was so shocked at what I saw there. We’ve covered conflicts on the African continent where people have fled but you’ve never seen 1.5 million people flee in one week.”

He met a number of Africans who were either working or studying in Ukraine and were now desperately trying to escape.

Becky Adong and her husband are from Uganda and have lived in Ukraine for over 10 years. Her two children were born in Ukraine and speak fluent Russian and Ukrainian. Becky says: “My children, I feel so bad for them because this is their home, this is the only place they know. They’ve not even been to Uganda.”

Jessica Orakpo is a Nigerian medical student who was based in western Ukraine. She told BBC Africa Eye that while making her way to the Polish border, she was stopped from boarding a bus.

In Poland, Peter and his team experienced racism first hand, being turned away from two restaurants and confronted by men angrily demanding to see their BBC IDs.
Peter says: “Because of this experience that I’d had, this very uncomfortable experience of somebody judging me for my skin colour, it made me understand what these people who had crossed from Ukraine were telling me and for them to say it was worse on the Ukrainian side I just can’t imagine.”

Despite all of this not all African families had this experience. Nigerian football coach Obi Ojimadu and his family have lived in Kharkiv for the past 17 years and were lucky to escape to Hungary.  They were moved by the reception they got, as they crossed into Hungary.
Obi said: “Irrespective of who you are, whether you are Ukrainian or you are not Ukrainian, as long as you are coming out from Ukraine as a refugee, everyone is being well, well taken care of here.”

Meanwhile the Ukrainian government has promised to spare no effort to solve the problem.  Although many lives have been devastated by the conflict, many African students and residents told BBC Africa Eye they still felt that Ukraine is their home and would go back. But with no end to the conflict in sight, many question what the future holds for them and the people of Ukraine.