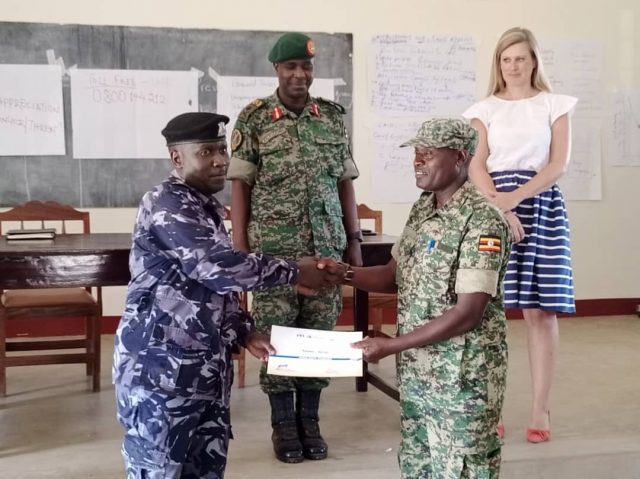 Uganda People’s Defence Forces’ troops in the Karamoja Sub Region have been taken through a three-day (17 to 19th May 2022) training, held in Kotido district which equipped participants with knowledge and skills on: Human Rights and need for disarmament, Human Rights and Women/Children, Observation of Human Rights standards, Standard Operation Procedures and Code of Conduct for UPDF soldiers during operations, and Human Rights instruments, among others.

In his remarks as he closed the training, UPDF 3rd Division Commander, Brig Gen Joseph Balikuddembe noted that the training comes at a time when there’s need to respect human rights in the pursuit of cattle rustlers who are destabilizing the sub-region.

“As state actors, we commit ourselves to line obligations of protection, respect and fulfillment as regards human rights aspects,” Brig Balikuddembe emphasized.

He called upon troops to always subject offenders to the rule of law before pronouncing judgement.

He also urged soldiers to work alongside other civil authorities and key partners to build cordial working relationships that aim at mitigating human rights violations.

“As human rights ambassadors, we shall give you audience to sensitive, share and pass knowledge to other others as we mitigate some allegations,” remarked Brig Gen Balikuddembe.

The Division Commander also reminded participants that UPDF will remain committed, accountable, observe and promote all the desired human rights standards. He cited Article 208 and 209 of the Constitution of the Republic of Uganda, which stipulate the roles and responsibilities of UPDF as a pro-people force.

Speaking at the same function, the UN Country Deputy Representative, Ms. Grace Pelly expressed her gratitude for closely working with the UPDF in building sustainable peace and stability initiatives across the country.

“Such fruitful engagements have helped the UPDF to promote human rights standards before, during and after operations. We like to see it move to greater heights,” she said.

She commended participants for their interactive deliberations and the UPDF leadership for observing human rights standards in all its missions.

The Regional Human Rights Officer Mr. Lomongin P Santos said that such rotational trainings shall be extended to other sister security forces including the Anti-Stock Theft Units (ASTU) once resources are realized.

The closing ceremony for the training was also attended by the UPDF 405 Brigade Commander Col Wilberforce Sserunkuma, Superintendent of Police Musa Kayongo, Senior UPDF Officers and representatives from UNHR and UHRC, among others. to the officers and militants in recognition of their participation in the training.