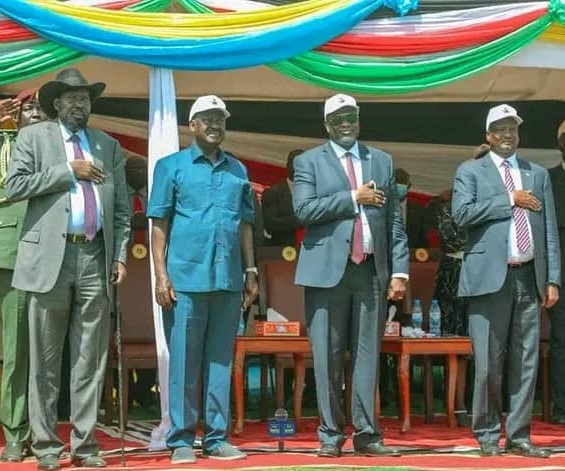 South Sudan’s President Salva Kiir has welcomed calls for home-grown solutions to settle disputes in politics as well as the military.

The proposal came from Kenya’s High Representative for Infrastructure Development in Africa, Raila Odinga during Thursday’s inauguration of the Freedom Bridge, a $91million project funded by Japan’s aid arm (JUCA).

“The advice he [Odinga] gave us should seriously be taken because of peace. When he shook hands with President Uhuru [Kenyatta], differences that existed between them disappeared. Kenya is now in peace,” said Kiir.

The South Sudanese leader sad Kiir said the urge for infrastructural development in the young nation prompted his administration to invited the former Kenyan Prime Minister to grace the official launch of the bridge.

“It is this desire for infrastructural development that we are pleased to have His Excellency Raila Odinga with us today. He is here in his capacity as the High Representative for Infrastructure Development in Africa”, he stressed.

For his part, Odinga urged Sudanese leaders to learn how to talk, forgive each other and work towards a better future for the country and its people.

He said South Sudan’s should devise home-made remedies to its problems, while emphasizing that the East African country is bigger than individuals.

He cited Kenya’s post-election violence in 2007, in which his supporters rejected the presidential election results, but the matter was amicably resolved by the country’s political leaders for peace and stability to prevail.

“We had a problem, and no country in Africa does not have problems. There were problems in Kenya, in 2007, many people were killed during disruptions following the disputed election in 2007,” Raila said on Thursday.

He added, “We said we had homegrown solutions to our problems, shook hands together with Uhuru Kenyatta that brought peace in the country”.

Raila, a likely presidential candidate in the August polls, urged South Sudanese to seek home-made approaches to problems, saying such remedies are neither in Addis Ababa, Kampala and Nairobi nor Khartoum.

“I want you people to talk as brothers and let the guns go to the barracks and you have to be protected by civilian police. If you guys do this, nothing can stop us in this region of East Africa from achieving proper integration of this reunion and realizing the dreams of the founding fathers of this country”, he stressed.

South Sudan gained independence from Sudan in 2011, but descended into violence in 2013 after the leaders failed to agree on democratic and institutional reforms. The leaders signed the peace agreement in 2015 to end the conflict, but the violence resumed in 2016, putting the country on the path of anarchy. The deal was revitalized in 2018, allowing the leaders to participate in the coalition government expected to champion reforms and lead the country to elections at the end of the transitional period.

Despite the agreement relations between Kiir and his first deputy, Riek Machar have never been smooth and cordial, causing stalemates in the implementation of key provisions of the accord.