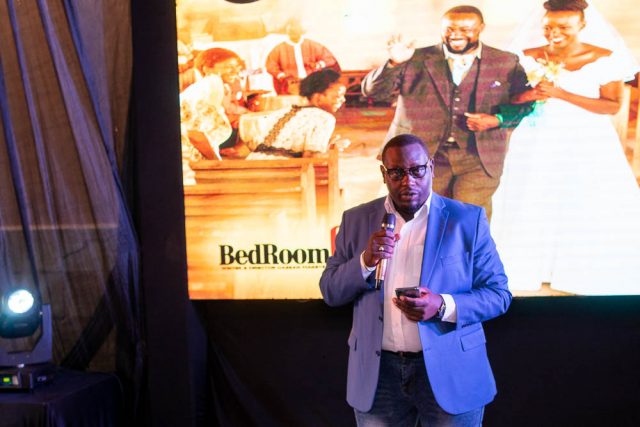 MultiChoice Uganda the home of great pay TV entertainment in conjunction with the Uganda Communications Commission has screened one of the films Bedroom Chains produced by Hassan Mageye nominated under the Best Screenplay, Best Sound Design, Best Costume Design, Best Production Design, Best Cinematography, Best Post Production and a number of other categories for this year’s Uganda Film Festival.

Over the past six months, in a bid to promote and train local talent MultiChoice Uganda in partnership with Uganda Communications Commission, carried out a film training roadshow with Cissie Nalumansi an alumni of the MultiChoice Talent Factory in Jinja, Gulu, and Mbarara where students from the universities were trained on how to film with low budget equipment like their mobile phones.

The screening that had quite a number of stakeholders in the industry present saw those in attendance appreciate the level to which Ugandan films have progressed and improved in terms of the quality produced.

Speaking at the screening of the film, Timothy Okwaro the MultiChoice Channels Director East and Southern Africa commended the filmmakers for the effort put into improving the film industry with the quality of work produced.

“Today in particular allow me recognize and commend Hassan Mageye and the team behind Bedroom Chains. Bedroom Chains tells the story of Natasha, a story that highlights the perils of the girl child, but ties into the liberation of Uganda, specifically the liberation of women in Uganda. The actors, actresses, crew involved in the making of this film outdid themselves and as such deserve the recognition too. I can’t wait for everyone in the room to watch this movie later tonight,” Okwaro mentioned.

He further urged the relevant stakeholders and regulators present to strive to uphold the industry and improve it each passing day with the various decisions made and implemented while congratulating UCC upon its 9th edition of the Uganda Film Festival.

“Despite the effort and work put into improving and creating a lucrative industry, the onus remains on the key stakeholders in the industry to ensure that filmmakers works are protected, that their work is nurtured and will thrive in Uganda. I congratulate the UCC on this 9th edition of awards and look forward to seeing what else is coming out of Uganda,” Joan Semanda Kizza, PR and Communications Manager for MultiChoice Uganda added.

The 9th edition of the Uganda Film Festival is set to take place on the 3rd of June 2022 where there are over twenty categories that recognize and celebrate film makers with lots of exciting prizes up for grabs.

Nominees of the category that MultiChoice sponsors this year-round will stand a chance to win a cash prize which will be announced on 3rd June, as well as two trips to immerse themselves in Uganda to have a better understanding of how to tell the local content story on the beauty that is in Uganda.  to Chobe Resort in a bid to recognize those that are outstanding and deserve a chance to unwind at one of the country’s biggest resorts. MultiChoice Uganda will be awarding the categories of Best Indigenous Film, and Best Director.

This comes off the return of previous MultiChoice winners who have just returned from a weeklong immersive experience in how MultiChoice Group operates.  They had the opportunity to visit The MNet Post Production Studio, a session with Dolby Studio,  and the SuperSport Studio to mention but a few.