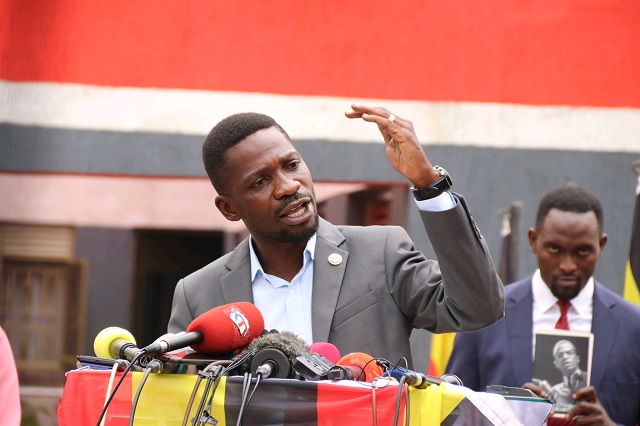 According to Kyagulanyi, the majority of the common people in the ghettos largely survive on meals made from wheat and oil, which are used to make chapatis.

He argues that suspending taxes on the two items will make them cheaper and more affordable to the poor people given the high cost of living.

Kyagulanyi was addressing journalists at the NUP party headquarters in Kamwokya to coincide with the state of the nation address by President Yoweri Museveni.

He lashed out at Museveni for telling Ugandans to shift to cassava to survive instead of eating expensive wheat products. He said that cassava cannot be used to make the essential food for the commoners dwelling in the ghettos.

He says by cutting the classified expenditure, it will help the government to cover the money lost in the suspended taxes for the provision of social services.

Early this year, Parliament rejected a proposal by Kampala Central Member of Parliament, Muhammad Nsereko to exempt bread from Value Added Tax. This was during a debate in which MPs were considering the Value Added Tax (Amendment) Bill, 2022. Nsereko argued that wheat should be exempted from the tax to make it affordable.

He argued that instead of exempting hotels and lodges from paying VAT, the exemption should be put on wheat. However, MPs disregarded the proposal, saying its approval wouldn’t automatically result in a reduction in the prices of the commodities derived from wheat.

The approximate price range for Ugandan wheat flour is between Shillings 3000 and Shillings 3500 per kilogram.  The average price for a tonne is US$ 521.44 in Jinja and Kampala. For a long time, the government has blamed the increasing prices of essential goods and services like laundry soap, wheat flour, cooking oil, education, and transport on crises ranging from the Russia-Ukraine crisis to the ongoing COVID-19 pandemic.

Aside from this blame game the government has not done anything tangible to resolve the escalating prices.