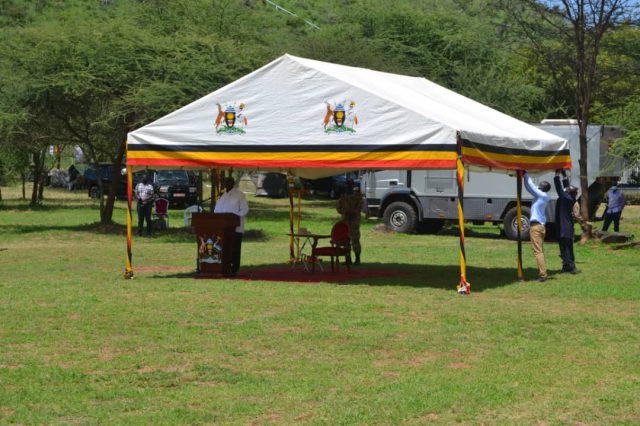 The President of the Republic of Uganda and Commander – In – Chief of the UPDF H.E Gen Yoweri K Museveni vowed to end gun violence in Karamoja Sub-region.

“Am here to ensure that we get peace. My aim is to have no raid at all,” said Gen Museveni.

The President made these remarks on 13th June 2022, at Morulinga State Lodge, Napak District while meeting regional leaders and security heads of Karamoja sub-region.

President Museveni noted that there are two mistakes made by the Karimojong people; one is that they think that prosperity can be achieved through lawlessness and through insecurity.

Then next is failure by government officials to listen to aggrieved parties. “Anybody who raids must be apprehended,” directed President Museveni.

He directed all Government officials to stop the habit of failing to listen to people’s grievances but always explain the delays, if any.

“Tell Karimojong that these two mistakes will not help us,” he advised

He noted that the Joint Security Forces should continuously deal with armed warriors, those using bows and arrows and the ones who drive animals with sticks. Other identified suspects are the informers to warriors and suspected warriors.

He urged leaders to augment on the truth for justice and peace as opposed to revenge.

The President also stressed that just like in Kampala, plans are underway to roll out electronic vehicle and motor cycle monitoring systems in Karamoja Sub-region to monitor movements and locations by the central command.” We are ready to roll out a robust response to eradicate criminality,” emphasized the President.

He reaffirmed that the Joint Security Forces will be supported with more additional troop carriers to enhance mobility and funding so as to strengthen intelligence networks, among others.

Gen Museveni noted that good bilateral relations and cross border security mechanisms with the regional leaders of the East African Community, particularly the Republics of Kenya and South Sudan can help to follow the criminals and hold them accountable.

He pledged to renovate St. Kizito Matanyi Hospital to enable it handle emergency cases in the region.

Speaking at the same function, the Vice President, Maj (Rtd) Jessica Alupo noted that the two days in the region marks the climax of meetings and campaign on efforts to end cattle rustling in Karamoja Sub Region. She appreciated the President’s focus to end criminality both voluntarily and forcefully.

The Deputy Chief of Defence Forces and Inspector General of UPDF, Lt Gen Peter Elwelu gave assurance that the disarmament operation is critical and will be successful as planned.

He said all Deputies or Second in Command of all formations or units will improve their inspections of armed forces and equipment, among other roles.

The Chairperson of Karamoja Parliamentary Group (KPG) and Member of Parliament for Pain County, Hon Remigio Achia said that one of the things worthy celebrating are the NRM achievements, in terms of education, peace and security, among others.

He commended the President for ending trans-border violence in the region.

The leaders pledged to continue cooperating and coordinating with the joint security forces to avoid any other resurgences of criminality in the region.

The ongoing Cordon and Search Operations are aimed at recovering guns, ammunition, livestock and apprehending suspects to break the alliances of criminal elements,” he stressed.

He alluded that the Division is in continuous coordination to deter cattle raids in Otuke, Alebtongo and Agago under 5 Infantry Division.

In a period of three weeks, the Joint Security Forces have recovered 106 guns from illegal hands, 382 rounds of ammunition, over 600 head of cattle and several suspects arrested, prosecuted and remanded through civil courts, among other achievements.

The security meeting was also attended by the Minister for Karamoja Affairs, Hon Mary Gorretti Kitutu, her Deputy, Hon Agnes Nandutu and UPDF Commander of Land Forces Lt Gen Kainerugaba Muhoozi, among others.