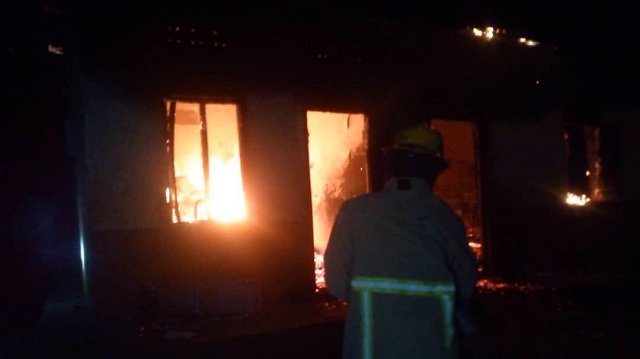 Police in Busoga East is investigating circumstances under which fire gutted dormitories at Iganga High school.

The fire that started at 9.00pm on Sunday torched both the senior three and senior four boys dormitories as the students were still having their evening preps. The cause of the fire has not yet been established.

Sources within the Police fire and rescue services department have said that all the students are safe, although some of their property was burnt. Mattresses, books, shoes, clothing and other scholastic materials were burnt.

Students told Uganda Radio Network-URN that they saw a big cloud of smoke hovering over their dormitories during the night, however, the warden refused them from entering to pick their property.

A section of students who spoke on condition of anonymity say that they forcefully broke into the dormitory, with hopes of retrieving their vital documents but retreated after noticing that the fire had generated huge flames within the interior rooms.

The school administrators have since declined to comment about the matter stressing that they will prepare a press release after receiving a comprehensive report regarding the cause of the fire from police.

On his part, Musa Ssengoba, the speaker of Iganga municipal council says all the pupils at the school are all safe, but accused a section of well-wishers of robbing some items from the school.

Ssengoba urged police to expeditiously investigate the matter and help students to recover part of their lost items amidst the current standoff at the school.

Nandawula says they suspect loose electricity lines within the boys dormitory area might have sparked off the fire. She added that investigations into the cause of the fire have started.