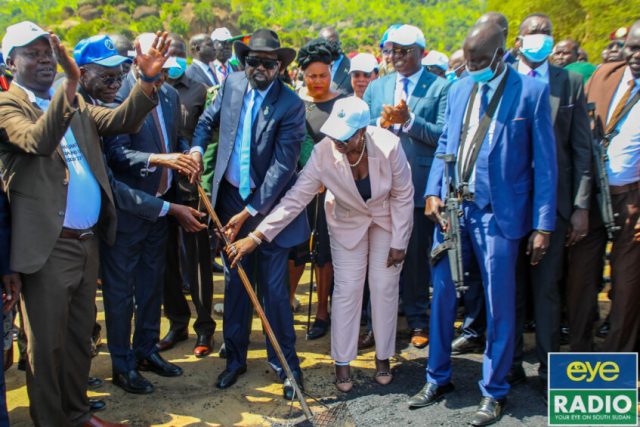 President Salva Kiir has said his government plans to build three more bridges for every single bridge destroyed by the former SPLA during the struggle for independence.

Speaking at the commissioning ceremony of Luri and Haboba bridges, Kiir said the former rebel movement destroyed the bridge to isolate Juba and other towns from external forces.

“Today, we have a good reason to celebrate the opening of Luri bridge. I am very happy to see it functioning again, the SPLM/A has participated in the destruction of this bridge when we were fighting during the struggle for independence,” the president said.

Kiir officiated the newly constructed Luri and Haboba bridges, which connect Juba with the western part of the country on Wednesday.

“We wanted to isolate Juba from external forces. So, it has come back to us again, and for anyone bridge that we destroyed, we must build three more bridges so that South Sudan reconnects again,” said the head-of-state.

In 2019, the parliament allocated 86 million South Sudanese Pounds for the rehabilitation of the ailing bridges, that were known for deadly accidents involving passenger cars plunging into the rivers.

The Luri bridge collapsed on 27th April 2021 as a result of heavy rains which claimed several lives.

Last year, four army officers died, and 16 others survived after two of their vehicles slipped off the bridge into the river.

The incident occurred four years after six mourners drowned when a vehicle swept into the same river.

President Kiir said the bridge is reconstructed no more lives will be lost to the river – something he said is worth celebrating.

“The good part is that our people will no longer die here from today onward. I officially open luri and haboba bridges and launch the tarmacking of western equatorial and Bhagazel high way,” he said.

“The opening of Luri and Habuba bridges connect Juba and towns with production areas in Western Equatoria as a result we accept the immediate benefit of increased local trading,” he stated.

President Kiir directs the Ministry of Roads and Bridges to set regulations to regulate overloading cargo trucks to protect the bridges.