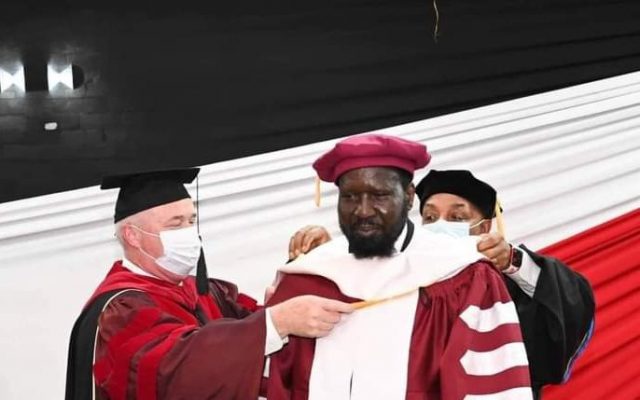 South Sudan’s President Salva Kiir was on Thursday awarded for brokering as well as mediating peace in neigbouring Sudan.

The involvement of the South Sudanese leader culminated into a peace deal between Sudan government and some hold-out opposition groups.

President Kiir’s honorary degree in humanities was presented by the Ethiopia-based University Luzon and the International leadership Institute.

“Having etched in the annals of the history, an important milestone and significant achievement in the path of peace by brokering and mediating peace agreement for the republic of Sudan in its gradual transition to empowering independent institutions and democracy”, partly reads a statement the institutions issued in recognition of South Sudan’s president.

The honorary accolade was reportedly in recognition the South Sudanese leaders’ efforts in peace-building, good governance, development and uniting the people of South Sudan through transformational leadership, diplomatic relations and international understanding, among other issues.

“Having deeply demonstrated patriotism and commitment to his country and the people and zealously dedicated his life as a statesman and country leader who had humble beginnings and rose from the ranks in achieving international diplomatic relations and world peace,” it noted.

The South Sudanese leader was also hailed for inspiring the country’s youth.

For his part, Kiir thanked the University of Luzon and the International Leadership for bestowing him with the honorary doctorate on humanities.

“When my team and I decided to explore ways to make contribution complementing efforts which we felt would   bring peace and restore stability in Sudan, we were not looking for any recognition like this, we were doing it because peace in Sudan is a peace in the region”, he explained.

Kiir dedicated the award to all the South Sudanese for their peace efforts.

In 2021, the South Sudanese leader received the African peace prize for fostering peace.