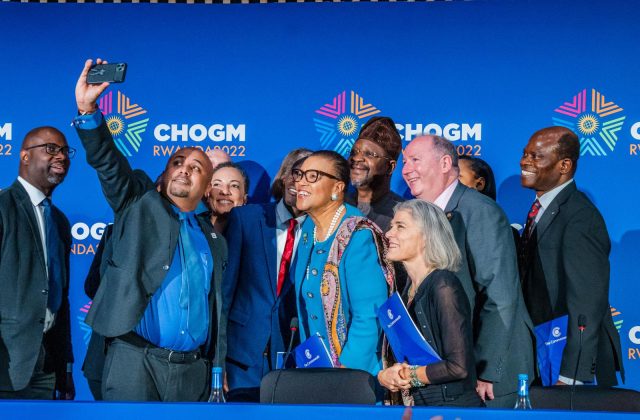 The historic intergenerational dialogue saw young leaders sitting in a circle with prime ministers, presidents, ministers, and heads of delegation from 15 countries, including Rwanda, Canada, The Seychelles, and Samoa.

Chairperson of the Council, Kim Allen from Papua New Guinea, kicked off the conversation with a sharp focus on the Youth Forum Declaration – a proposed action plan for youth-led sustainable development created by more than 350 young people from across the Commonwealth. He called on the leaders to offer the new Council guidance and financial support for their initiatives.

Interspersed among the government leaders, Council members each delivered a special message from the young people in the regions they represent.

Vice Chairperson, Inclusion and Engagement Christabel Derby, from Ghana, focused on the multifaceted challenges facing young Africans, such as education, healthcare, gender equality and unemployment. She passionately called for an enabling environment in which young people can thrive.

“When I go back home, I want to tell the young people of Asia that we were not just given a seat, we were given priority.”

Reminding leaders that there are youth from rural communities and minority groups who are not able to sit in the room with them, but who need access to the technology to participate in the conversation, Caribbean Regional Youth Council Representative, Kendell Vincent, highlighted the need for digital transformations.

Echoing these sentiments Regional Representative for Europe and Canada, Namir Chowdury, revealed the Council’s intention to work with ministers and organisations on creating holistic education programmes and curriculum that will prepare young people for the changing landscape of work.

“This CHOGM”, he said, “could really be immortalised for one reason – which is we are reimaging what education can look like.”

Speaking for the Pacific, regional representative Sagufta Janif, focused on climate and sustainability solutions. Easy access to climate finance, she stressed, was needed to build resilient infrastructure so that businesses can focus on growth and employment instead of rebuilding again and again.

Responding to the young people, H.E. Paul Kagame, President of Rwanda promised to continue listening to and working with young people

Echoing his sentiments, Canadian Prime Minister the Rt. Hon. Justin Trudeau highlighted the importance of including young people in solutions to today’s challenges.

He said: “We don’t need you to be leaders of tomorrow, we need you to be the leaders you are today. You should be directly contributing to the policies and positions of the Commonwealth.”

Agreeing, Prime Minister of Samoa, Hon Fiamē Naomi Mataʻafa told participants: “Governments can no longer do things by themselves, whether we ever thought we could. But there is growing acknowledgment that governments are not enough. In going forward, we need to ensure all of society is involved.”

While Seychelles President H.E. Wavel Ramkalawan highlighted the need to engage young people in politics: “As we go about campaigning, we realise our young people become disconnected with the politics. It’s only by getting in, that you will make your voice heard. And changes will happen. […] You are leaders in your own rights.”

Congratulating the young people for speaking on behalf of the billions of youths in the Commonwealth, Secretary-General Patricia Scotland said: “Today is a moment for us to reset the agenda, for us to start to reimagine what our world could be, what our world should be, and you are shaping it for us.”

During the meeting the Prime Minister of Pakistan, Shehbaz Sharif, announced, by video link, that Pakistan would be hosting the Commonwealth Youth Ministers Meeting in Pakistan in January 2023.

The dialogue was the last youth-led event in a week of activities leading up to the Commonwealth Heads of Government Meeting.