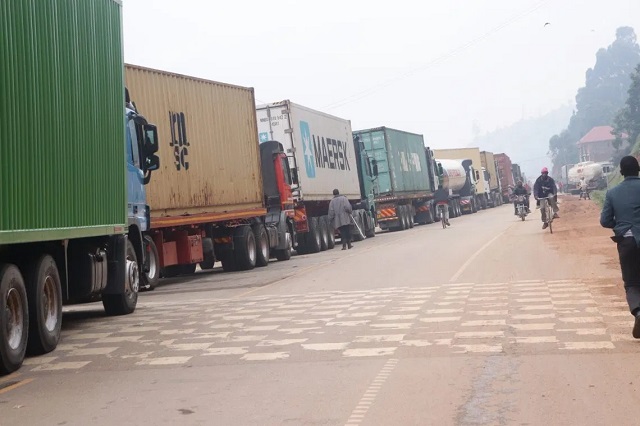 Hundreds of trucks have piled up at Elegu border point in Elegu town council, Amuru district following violence that erupted across the South Sudan border town of Nimule on Monday. Traffic came to a standstill for the better part of Monday after angry locals staged a protest and blocked the Nimule-Juba highway after a gunman shot dead a Madi clan chief in Nimule town, Magwi County, Eastern Equatoria state.

Eye Radio, an independent radio broadcaster in Juba reported that the late John Ebele was attending a fundraising meeting when the incident happened. The tension according to sources forced South Sudan security to temporarily close Nimule border, bringing transport along the busy highway between Uganda and Africa’s youngest nation to a halt.

Security personnel at the border who spoke to Uganda Radio Network in an interview on condition of anonymity on Tuesday said Uganda Revenue Authority-URA also stopped clearing trucks at Elegu border.

“The tension of (Monday) crippled the work of URA. URA is supposed to be clearing the trucks every day but there was that temporary closure and people couldn’t move, the work of the URA was congested,” one of the sources said.

He estimates that close to 500 trucks are currently at the border point waiting for clearance before crossing into South Sudan. He however notes that whereas the border has already been opened, some truckers and passenger vehicles are opting to stay on the Ugandan side waiting for an assurance of secure passage along the Nimule-Juba highway.

“Our side is safe, but I can’t guarantee that everything is well across in South Sudan although the authorities there have revealed the situation is under control. We want travelers to take caution,” he said. Richard Omony, a businessman in Elegu town council, says that buses had started crossing into South Sudan from Uganda but noted that many people weren’t yet sure of their safety.

“The border was last night closed but now it’s open. You know when such things happen in South Sudan, people here get a little cautious and it’s the reason many are still not willing to cross,” Omony told URN in an interview on Tuesday.

Wilfred Oyoo, a taxi driver plying Gulu-Nimule highway says he had witnessed hundreds of trucks piled up at Elegu border point waiting for clearance from Immigration and URA officials. “I am not sure of the numbers but from what I am observing, there are more than 300 trucks, the numbers could be many,” said Oyoo.

He notes that the trucks couldn’t cross into Nimule on Monday because of the hostile situation. Nighty Atimango, a hairdresser at Nimule township told our reporter that she fled early Tuesday morning into Uganda following Monday’s violence.

Atimango says that many people had also deserted the busy township fearing growing escalation of tension among the Madi Community who has lost three of their people in less than a week in similar attacks. The fourth Infantry Division Spokesperson Cpt Hassan Ahmed Kato says despite the violence on the Nimule side, the Ugandan border remained open and operational.

However, by press time, an army officer overseeing Elegu border post who didn’t want to be named since he doesn’t speak for the army said normal traffic had resumed along the Nimule-Juba highway but stressed that many were not yet willing to take chances from the Ugandan side.