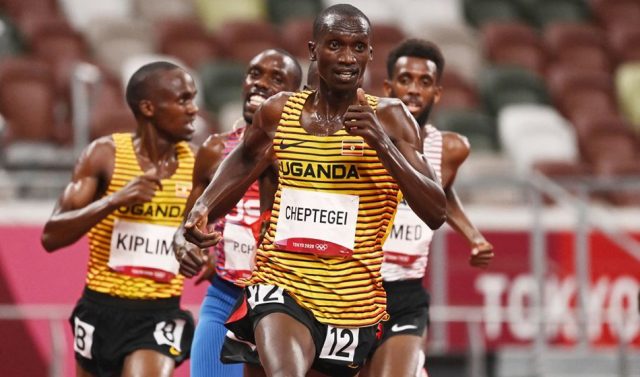 Uganda’s Joshua Cheptegei will not compete at the 2022 Birmingham Commonwealth games.

The star athlete, the defending champion of both the 10,000 and 5,000 metre at the Commonwealth games was scheduled to compete in the 5,000-metre race that will be held on August 6, 2022. But Uganda Police Athletics Club Coach Benjamin Njia told URN that the athlete failed to recover from the injury he sustained at the World Championships in Eugene, last month.

The 25-year-old suffered a tendon injury after participating in the 5,000-metre heats, days after winning a gold medal in the 10,000-meter race. After the competition in Eugene, Cheptegei returned to Uganda with the hope that he would recover in time for the Commonwealth games.

“He will not be able to participate in Birmingham. I left him in Kapchorwa and I am travelling now to Birmingham. I thought we would attend to his injury until it gets fair but he has not yet responded,” Njia said.

Now, all hopes will be placed on his compatriot Jacob Kiplimo, the lone Ugandan in the 10,000m distance at the Alexander Stadium today evening. Kiplimo will be hoping to emulate his brother Victor Kiplangat who opened Uganda’s medal tally at the 2022 games when he won Gold over the 42-kilometre distance.

Kiplimo who has the eighth fastest time in the world over the 25-lap distance which stands at 26:33.93, better than any other athlete in the race will face competition from Kenya’s trio Daniel Simiyu, Kiwotti Kandie, and Edward Pingua among other athletes.

The 21-year-old Olympic bronze medalist will have a huge task of defending Uganda’s huge history in the previous edition of the games where Uganda dominated the 10,000-metre distance over the last four editions of the games.

Uganda has won the last four 10,000 metre titles starting way back in 2006 when Boniface Kiprop triumphed in Melbourne followed by Moses Kipsiro who won the title in Delhi (2010) and defended it in Glasgow (2014) before Joshua Cheptegei won it in Gold Coast in 2018.

After the 10,000-metres, Kiplimo who won bronze at the just concluded 2022 world athletics championship will then return to the track on August 6, 2022, to compete in the 5,000 meter distance.