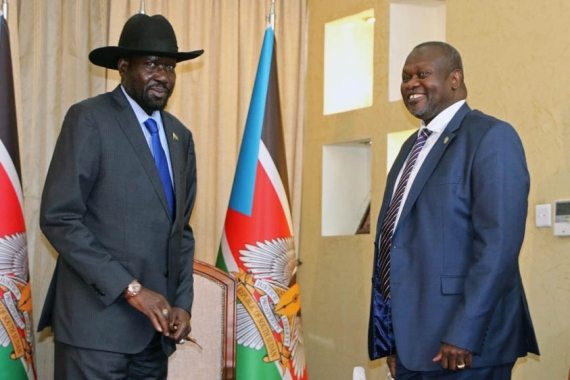 The Presidency has tasked the speaker of parliament to resolve the contentious issue that compelled SPLM –IO lawmakers to boycott sittings in recent months.

The main opposition lawmakers have stayed out of parliament for nearly two months, in protest over the enactment of Political Parties Act.

They claimed the amendment was passed without a consensus.

However, the Spokesperson of the First Vice President said President Kiir and Riek Machar agreed on Firday, that the enactment of Political Parties Act was based on a power-driven majority.

Puok Both Baluang stated that the principals decided to refer the matter back to Speaker Jemma Nunu Kumba to address the grievances.

“Yesterday the issue was discussed thoroughly, and they agreed upon that to dispose of the boycott of the SPLM – IO of the parliamentary caucus from the parliament,” said Baluang.

The Political Parties Bill stipulates that, for a political party to be registered, it must have at least 500 members from each of the 10 states, yet others proposed just 300.

It also provides that, budget allocation to political parties shall be based on the outcome of general elections.

However, the main opposition lawmakers, who disputed provisions of the bill, walked out of the parliament, claiming their colleagues from the ruling SPLM acted unilaterally to pass the bill.

Following the boycott, Speaker Jemma Nunu Kumba forwarded the matter to the presidency for resolution.

According to Puok Both, the outcome of the presidency meeting also agreed that all bills passed in the parliament after the opposition boycott should be nullified.

“He (President Kiir) also agreed that any bill coming from the NCAC should not be tempered. Whatever bill that has been passed in the parliament after the boycotting of the SPLM – IO should be nullified,” he said.

“And this is one of the issues will be communicated to Nunu Kumba by the minister of the presidential affairs,” Both added.