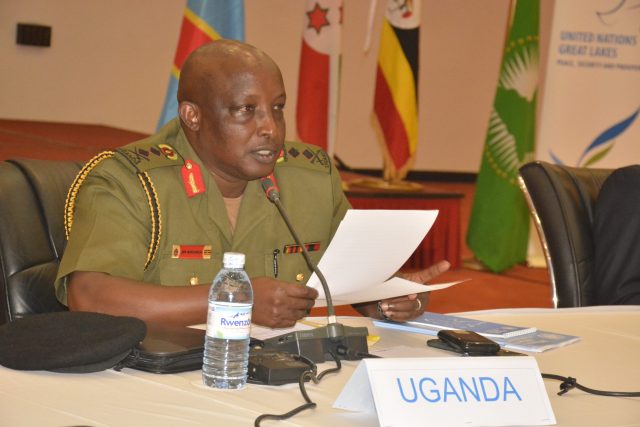 The UPDF Chief of Military Intelligence, Maj Gen James Birungi has opened the Fifth Meeting of Heads of Intelligence and Security Services of the Contact and Coordination Group Member States in Kampala.

Maj Gen Birungi applauded the Office of the United Nations Secretary-General for initiating the Contact and Coordination Group, intended to explore non-military strategies for conflict resolution in the Great Lakes Region. He said the meeting comes at a time when regional peace and security is threatened by numerous threats such as terrorism, trans-national and cybercrime.

The representative of the Special Envoy of the United Nations Secretary General for the Great Lakes Region said they are in Uganda as a follow up of a meeting that was held in Goma, DRC where different engagement strategies were developed.

The meeting was attended by representatives from CCG Member States, Observer States, Guarantor institutions of the Framework Agreement and Partners.

The main objective of the 3-day meeting is to take stock of the operationalization of the Contact and Coordination Group as well as that of its Operational Unit in the current security context and to decide on the next steps to that effect.

Other Partners to the Framework are the Expanded Joint Verification Mechanism, Joint Intelligence Fusion Centre, MONUSCO, and the United Nations Office of Rule of Law and Security Institutions.