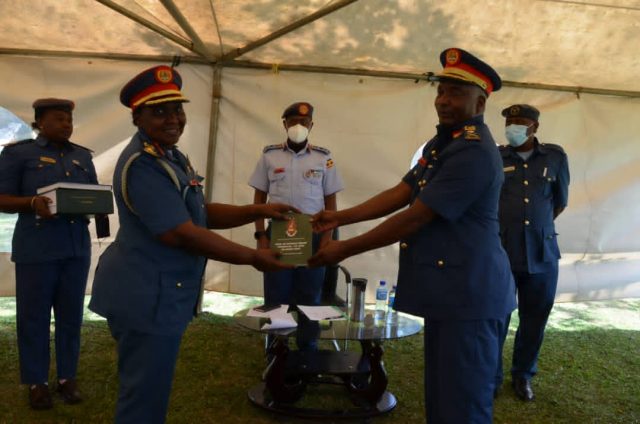 Brig Gen Rebecca Mpagi has today handed over office to Brig Julius Bagonza in preparation for her Retirement next week.

Brig Gen Mpagi has been the Director Personnel and Administration in Uganda Peoples Defence Forces – Air Force at Entebbe.

The function was officiated by Chief of Staff Air Force Brig Gen David Ngonyi.  Gen Gonyi welcomed the incoming Director and advised him to work hard, beat deadlines and avoid procrastination. “Endeavour to do things today rather than wait for tomorrow”, he advised.

He thanked the outgoing Brig Mpagi for being a dedicated and outstanding Director and wished her the best of luck in her retirement.

Brig Mpagi is among the highest ranking female senior officers in the Uganda Peoples’ Defence Forces (UPDF) and has previously served in different capacities including Director of Women Affairs among others.