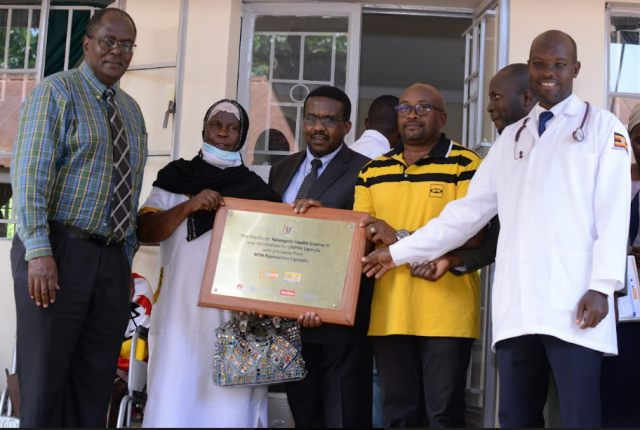 MTN Uganda Foundation and the official partners of the MTN Kampala Marathon in conjunction with the Ministry of health and UNFPA have officially today handed over a newly refurbished maternity ward inclusive of a state-of-the-art operating theatre at the Kalangala HC IV in a concerted effort to curb the raising maternal and child mortality rates in the region.

The MTN Kampala marathon that is run every year, for the last sixteen years has supported various causes ranging from providing safe water to water stressed areas in Uganda to providing sanitation facilities in schools among many interventions.

In the last three years however, maternal and child health have headlined the MTN Kampala Marathon with all the proceeds going towards complementing the government of Uganda’s efforts towards maternal health

This project is underpinned by MTN’s commitment to creating shared value and improving the lives of the people living in the communities within which it operates.

In a bid to uphold its commitment of investing in Uganda’s health sector, MTN Uganda aims to achieve the SDG 3 which focuses on health and well-being of people in communities. A total sum of Ugx.216 million was injected in the refurbishing and equipping of the maternity ward and the operating theater.

Kalangala district has a total of 84 islands and a continually changing population. The upgrading of the health center will aid in providing improved services to the numerous people in the region.

The auspicious occasion to hand over the newly refurbished maternity ward and operating theater was graced by district officials, the Ministry of Health and implementing partners such as UNFPA and Reproductive Health Uganda.

In his remarks to officiate the handover ceremony, Mr. Patrick Tusiime the Commercial Head central from MTN Uganda, relayed that this newly refurbished maternity ward and operating theater will give mothers and their children a safe and advanced medical facility where they can receive all round care.

“We believe that with the refurbishments made and the new equipment acquired at this facility will contribute to the periodic antennal visits made by pregnant women and also provide a safe environment for mothers whiling giving birth, this will help curb any anticipated issues in time and offer safe delivery for birth mother and child. Mr. Tusiime

The newly refurbished and equipped maternity ward plus operating theater in the Kalangala HC IV will enable the provision of quality health services that will aid the preservation of maternal-child health and general restoration of lives in the region.

The guest of Honor Mr. Richard Mugahi, Assistant Commissioner in charge of Reproductive and infant Health from Ministry of Health raved about MTN Uganda’s generosity in prioritizing maternal health and working to better communities by providing basic needs like access to better healthcare.

“We applaud MTN Uganda for their continued effort in supporting government initiatives that oversee the reduction of the soaring maternal and child mortality rate. We have seen a slight decline over the last 2 years and it is imperative that we stay the plans put in place to curb it.” He said

Mr. Mugahi retreated that the decline in mortality rates has reduced by 3.21% from last year and as government they commend institutions that have contributed to this decline such as MTN but urges the communities and health centers to remain vigilant in the struggle to end maternal and child mortality.

The operating theater and maternity ward were refurbished and equipped with machines such as the ultra sound, operating theater lights, oxygen concentrators, patient monitor for the theater, sterilizer, baby warmers and more. All these will be crucial in aiding safe delivery of babies and catering to patients during surgical procedures.

One of the biggest beneficiaries is the Kawempe National Referral hospital that garnered support in the amount of UGX 400 million which set up a state-of-the-art neonatal intensive care unit to collectively accommodate newborns.

MTN Uganda in realizing its commitment to support government and community initiatives embarked on implementing a 1.3 billion project called “Improving Maternal and Newborn Health outcomes”. This project has improved and enhanced the functionality of five health facilities which include Muyembe HC IV in Bulambuli district, Pakwach HC IV in Pakwach district, Karugutu HC IV in Ntoroko district and finally the newly commissioned facility in Kalangala district.